At the top of this illustration, I’ve pointed out, and marked, five 1860 buildings in the area near Longstown within what is now Springettsbury Township. At the bottom of the above illustration is a 1938 aerial photo of the same region. I’ve zoomed in on the 1938 aerial photo to provide better detail in locating the 1860 properties (s31) through (s35). Within this ‘Enlarged View A’ I’ve also pointed out an area that I’ve marked ‘See Enlarged View B;’ that is utilized in the post: Location of Strickler’s Cemetery in Springettsbury Township.

Shearer’s 1860 Map of York County contains the owner/occupant of most buildings; for example (s32) is U. Strickler. Additional information on U. Strickler can be found by consulting the 1860 Census of the United States; where one discovers this is Ulrich Strickler, a 69-year-old, farmer, with $11,200 in considerable real estate holdings. 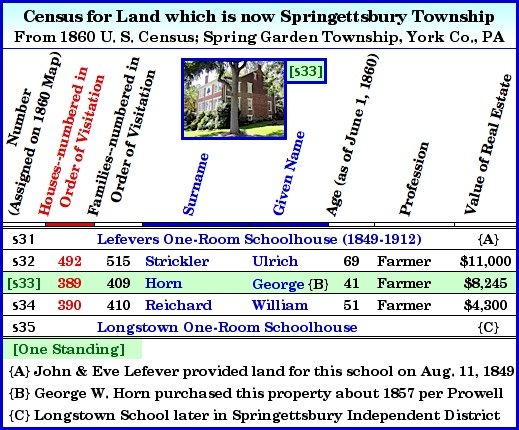 One of these 1860 buildings still stand. The farmhouse of George W. Horn stands just south of the circle in St. Andrews Court; within Heritage Hills Golf Course. George Prowell’s 1907 History of York County, PA notes a unique fact about this farmhouse in Volume II, page 928:

George Horn was reared on [a] farm in Windsor Township, and though he had few opportunities for attending school, was a great reader and became very well educated. He was an expert in figures. Especially conversant with the Bible, he could quote passage after passage verbatim. He was an active member of the United Brethren Church, and was for many years class leader.

Mr. Horn started in life as a blacksmith, but after a few years he gave up that calling, and about 1857 bought a farm of 119-1/2 acres in the southwestern part of Springettsbury Township [It was Springettsbury Township when Prowell’s history was written in 1907, however Spring Garden Township when George Horn purchased the farm in 1857.] The line between that and York Township passed directly through the place and the oven was so situated that bread was baked in York [Township] and eaten in Springettsbury [Township].

The front 2-1/2 story part of the house, located in Springettsbury, is mostly obscured by trees and shrubs; plus a much later wooden enclosed entrance. The following is a photo of the back of this farmhouse; i.e. that part of the house located in York Township.