At the top of this illustration, I’ve pointed out, and marked, ten 1860 buildings in the northwest region within what is now Springettsbury Township. At the bottom of the above illustration is a 1937 aerial photo of the same region. I’ve zoomed in on the 1937 aerial photo to provide better detail in locating the 1860 properties (w21) through (w30). 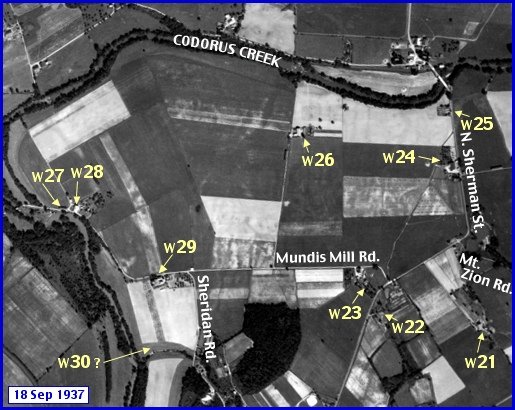 Shearer’s 1860 Map of York County contains the owner/occupant of most buildings; for example (w24) is H. Smyser. Additional information on H. Smyser can be found by consulting the 1860 Census of the United States; where one discovers this is Henry Smyser, a 45-year-old, farmer, with extensive real estate holdings. 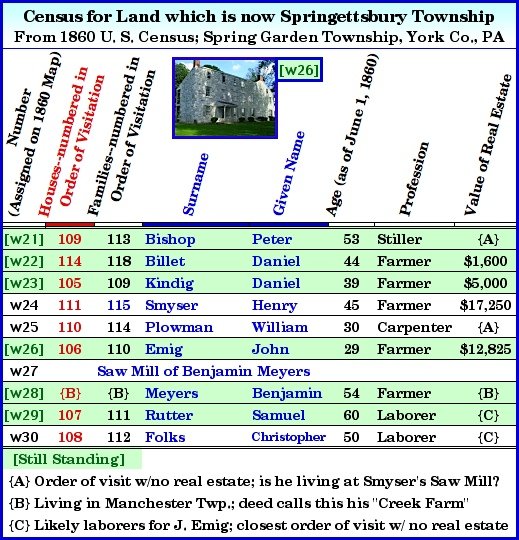 Six of these 1860 buildings still stand at these addresses:

The [w26] farmhouse still sits amid the Shenberger Farm upon which the new Central York High School opened in September, 2005. The following photo of this Georgian Farmhouse is from a Central York Web Site.

Utilizing U.S. Census Records, in conjunction with 1860 and 1876 maps of York County, the owner of this farmhouse was pinpointed as John Emig, a 29-year old farmer in 1860. Deed research leading to the discovery that [w28] B. Meyers is 54-year old Benjamin Meyers; yielded the additional clue that his neighbor is “John Emig of Valentine.” This is stating John Emig is the son of Valentine Emig; i.e. to distinguish this John Emig from several individuals named John Emig in the area.

The Biographical Section of John Gibson’s 1886 History of York County, PA states the following about John Emig on page 188:

John Emig was born in 1831, in York County, Penn., and is a son of Valentine and Rebecca (Loucks) Emig, both natives of York County, and descendants of old families. His father was a farmer and our subject was reared a farmer and has devoted his entire time and energy to farming. Mr. Emig came to Spring Garden Township in 1854, and purchased the farm upon which he has ever since resided. It consists of 126 acres of land situated in the Codorus Valley.  This tract of land he has greatly improved, raising all the cereals, and a large crop of fine tobacco each year.

He was married, in 1853, to Miss Sarah Eyster, a native of West Manchester Township, and a descendant of an old family of the county. She died in 1857. Two children were born to them: Horace E., a farmer in York County; and Frank, deceased. In 1858 Mr. Emig married Miss Susan Roth. They have had nine children: Margaret R., Emma R., Edward R., Augustus R., Henry R., Valentine R., William R., George R., and Amanda (deceased). Mr. and Mrs. Emig are members of Mt. Zion German Reformed Church.

In a 1989 interview, the owner Howard Shenberger believed the farmhouse was built about 1840. The 2-1/2 story stone house is three-bays wide and 80-feet in length. The house has three brick chimneys with five fireplaces. The walls of this house are 26-inches thick up to the second floor and 24-inches thick the rest of the way.