At the left side of this illustration, I’ve pointed out, and marked, ten 1860 buildings in the southernmost region within what is now Springettsbury Township. At the right side of the above illustration is a 1938 aerial photo of the same region. I’ve zoomed in on the 1938 aerial photo to provide better detail in locating the 1860 properties (s21) through (s30). Within this zoomed in view, I’ve also pointed out the location of the Erb Burial Plot, of which I’ve written several posts: 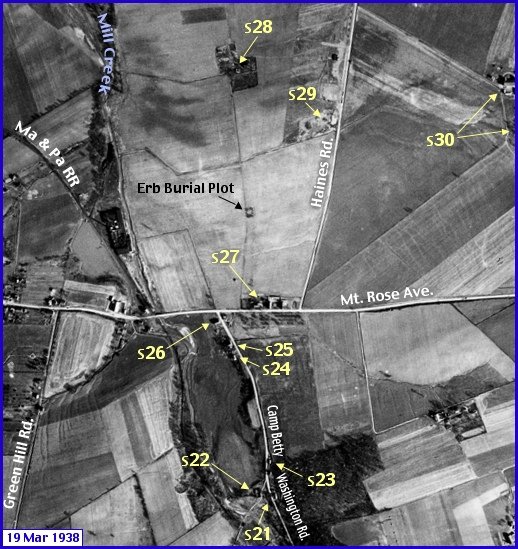 Shearer’s 1860 Map of York County contains the owner/occupant of most buildings; for example (s26) is S. Landes. Additional information on S. Landes can be found by consulting the 1860 Census of the United States; where one discovers this is Samuel Landes, a 64-year-old, farmer, with $21,200 in considerable real estate holdings. Samuel Landes owns several properties, presumably including the nearby Landes Grist Mill (s24). 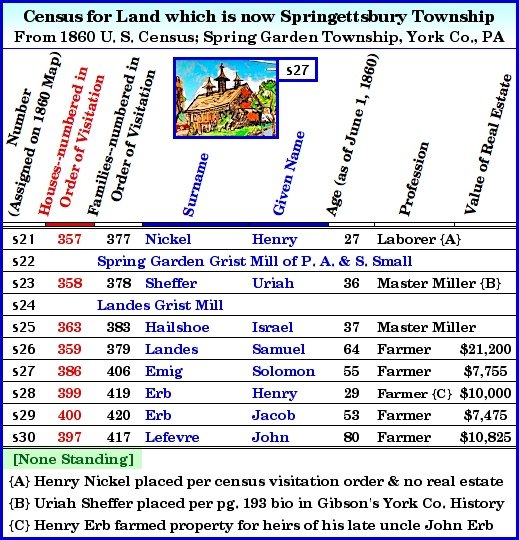 None of these 1860 buildings still stand. The construction of I-83 in 1958 chose the same path as Camp Betty Washington Road for a short distance in this area, spelling the demise of the remaining (s21) to (s26) properties still standing up to that time. Camp Betty Washington Road was shifted to the east, so that it aligned with Haines Road. Solomon Emig’s Hotel (s27) was a farmhouse residence for most of its life until being demolished to build a Mobil Service Station in 1965. The remaining homes were lost with the construction of Fayfield and Haines Acres developments over fifty years ago.

Three GRIST MILLS in The Area

Three Grist Mills appear within a very short distance along what is now known as Mill Creek on the small section of Shearer’s 1860 Map provided at the beginning of this post. Springettsbury Township was formed from the northeast part of that Spring Garden Township on April 20, 1891; with Mill Creek being the dividing line. That leaves the two Grist Mills, on the east side of Mill Creek sitting within the boundaries of Springettsbury Township.

Mt. Rose Avenue was initially known as Plank Road. The Grist Mill, remaining in Spring Garden Township, was north of Plank Road and west of Mill Creek; it was known as Plank Road Grist Mill. The two Grist Mills that became part of Springettsbury Township are identified as (s22) Spring Garden Grist Mill of P. A. & S. Small and (s24) Landes Grist Mill. The only place I’ve seen Grant Voaden note Landes Grist Mill was in his list of Mills along Mill Creek. It appears Grant never started a research file on this mill. Research data was elusive for me also; only noting this mill was no longer identified as a Grist Mill on Beach Nichols 1876 Atlas of York County.

The Grist Mill (s22) on Mill Creek was P. A. & S. Small’s first venture in flour milling. Grant Voaden describes this mill in his research notes (GV-141) within the Collections of the York County Heritage Trust. The four story stone mill was built in 1830 about five years before P. A. & S. Small’s much larger Codorus Mills in Manchester Township.

Remember my tip to check 1886 and 1907 York County Histories if unsure of assigning a name to an 1860 Map marker, which has no name designation. That tip paid off yet again.

The 1860 U. S. Census combined with Shearer’s 1860 Map set a location for Samuel Landes (s26); and he was the Census taker’s visit number 359. The two nearest visitation numbers for Millers were 358 and 363. With no additional information, I would have placed the Miller (visit 358; Uriah Sheffer) in Samuel Landes property (s25) next to Landes Grist Mill. However Uriah Sheffer appears on page 193 of the Biography Section of Gibson’s 1886 History of York County, PA; quoting:

The results of this information indicate Uriah Sheffer’s correct placement is at (s23) and the other miller, Israel Hailshoe, at (s25). Grant Voaden uncovered an interesting fact. William H. Sheffer, manager of the Spring Garden Mill, married Mary Stacks; she was the daughter of Abraham Stacks, who managed the Codorus Mills for P. A. & S. Small.

I wrote about The Famed Twin Barns along Mt. Rose Avenue. Those barns were, or would be, located next to Solomon Emig’s Hotel, identified as (s27) on Shearer’s 1860 Map.

These famed twin barns still stood only 50-years ago on the northwest corner of Haines Road and Mt. Rose Avenue in Springettsbury Township. I always thought the architectural styling of these barns was charming. Cliff Satterthwaite definitely captures that charm in this artwork he produced on site in 1962.

Cliff informs me that the artwork he shared for use in YorksPast was quickly done in his sketch book. At that same spot he produced an extremely detailed watercolor of the Twin Barns, right down to the detailing the clover field in the foreground. Cliff noted that a lady bought that artwork before he had a chance to photograph it. Cliff does not have a record of who bought it, but wishes he could get a photo of that artwork. If anyone has seen a very detailed watercolor of the Twin Barns, check if the owner would be willing to contact me. If so, I’ll put them in touch with Cliff Satterthwaite.