1860 Buildings 11 to 20 in North Region of Springettsbury Township

At the top of this illustration, I’ve pointed out, and marked, ten 1860 buildings in the Lower Glades Area within what is now Springettsbury Township. At the bottom of the above illustration is a 1937 aerial photo of the same region. I’ve zoomed in on the 1937 aerial photo to provide better detail in locating the 1860 properties (n11) through (n20).

Shearer’s 1860 Map of York County contains the owner/occupant of most buildings; for example (n18) is J. Knaub. Additional information on J. Knaub can be found by consulting the 1860 Census of the United States; where one discovers this is John Knaub, a 47-year-old, farmer, with $7,500 in considerable real estate holdings. 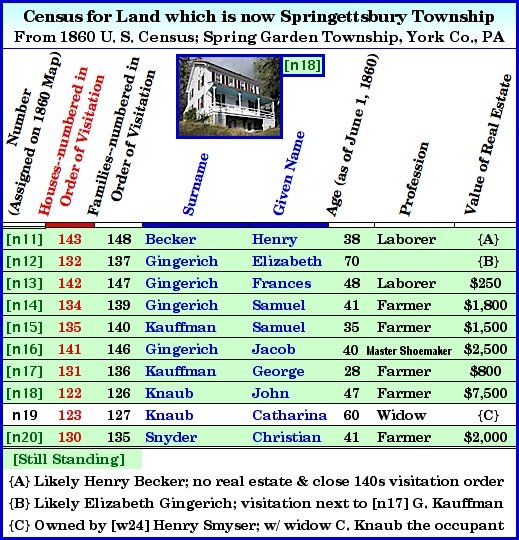 In 1860, John Knaub [owning n18] was the resident living in the Lower Glades Area who owned the most real estate. That fact often results in a mention within George Prowell’s 1907 History of York County, Pennsylvania; as is the case for John Knaub. Quoting from Volume II, pages 726 and 727:

John Knaub, was born in Spring Garden Township in 1813, where he received a common school education and was reared to be an agriculturist. He farmed in his native township during his entire life, owning about 300 acres of land near Brillinger’s Mill [an early name for the mill located where North Sherman Street crosses the Codorus Creek]. He married Sarah Zellers, both husband and wife dying in 1891, within a few days of each other, and being buried at Mount Zion Cemetery in Spring Garden Township [Springettsbury Township from 1891 onward]. They were members of the Reformed Church in whose work they took an active part.

In politics Mr. Knaub was a Democrat, serving on the election board, and as township supervisor and tax collector. The children born to this worthy couple were as follows: Henry, who was killed on the Northern Central Railroad, at Reynold’s Mill, York County; Samuel, a farmer of Manchester Township; John, deceased; Jesse [married Sevilla Jane Wilt and took up the stone and brick-mason’s trade in the City of York]; William, a farmer of York Township; Mary, who died in Windsor Township; and Susanna, the wife of Emanuel Dellinger living in York Township.

This photo shows the John Knaub farmhouse, along Lower Glades Road; as it appears today.

A 1993 site survey of this house noted the foundation of this Pennsylvania German Vernacular farmhouse is rubble, uncut, un-coursed stone with beaded mortar joints. Doors & windows on the ground floor have wood sills & lintels, plain & rectangular, sill plate & porch framing above is rough sawn. The building has a limestone foundation with wood upper floors.

The question has been raised; how old are these stonewalls? I suppose they could go back to the earliest settlers, who cleared the land to farm and found an over abundance of stones. Clearing the stones, and with them being relatively flat, made stacking them fairly easily to create fence walls. Do any of my readers have details on the creation of these Dry Stone Walls? Are there any early photos that include these walls?