Within this illustration, I’ve pointed out ten 1860 buildings and their corresponding location on a 1938 aerial photo.  I’ll work my way around Springettsbury Township, ten buildings at a time, until all buildings from 1860 are visited.  The present commercial corridors will be visited first.  See the post: Springettsbury Township building tally during 1860, for my specification of the four regions.

Shearer’s 1860 Map of York County contains the owner/occupant of most buildings; for example (s13) is A. Hiestand.  Additional information on A. Hiestand can be found by consulting the 1860 Census of the United States.

The results after consulting 1860 Spring Garden Township census records are shown below.  Spring Garden Township records must be used because Springettsbury Township was formed from the northeast part of that township on April 20, 1891.  The order of visitation, of the census taker, often provides assistance on who are neighbors and the tabulation of “value of real estate” separates the landowners from the renters or tenants: 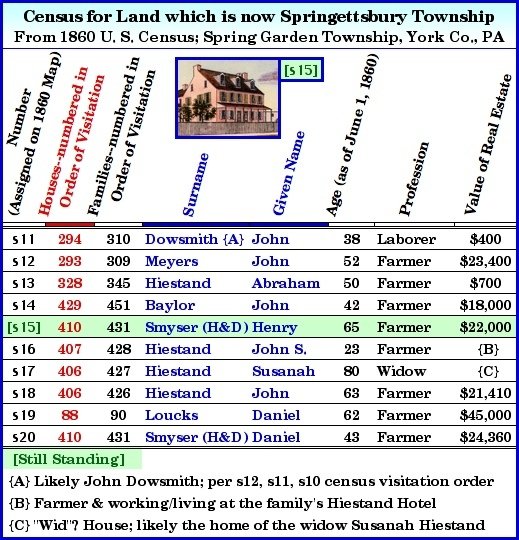 One of these 1860 buildings still stand at this present address:

Posts related to 3103 East Market Street are as follows:

My goal is to get community involvement.  If anyone has a story associated with an owner of this property, please post a comment.

For greater clarity, the following is a zoomed-in view of the white dotted region drawn onto the March 19, 1938, aerial photo, at the beginning of this post: 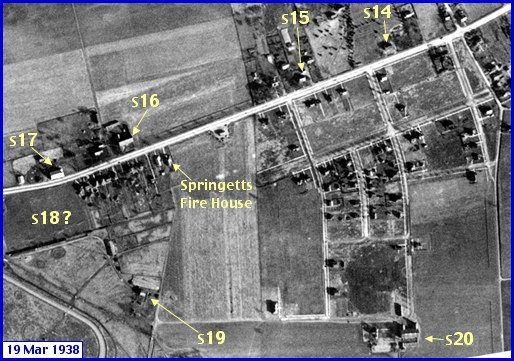 The initial Springetts Fire House is pointed out in this 1938 aerial photo.  More on the 1931 fire station is told in the post: What do Fire House, Woozy Moose and Casablanca have in Common?