At the top of this illustration, I’ve pointed out, and marked, ten 1860 buildings in the northeast region within what is now Springettsbury Township. At the bottom of the above illustration is a 1937 aerial photo of the same region. I’ve zoomed in on the 1937 aerial photo to provide better detail in locating the 1860 properties (n1) through (n10). 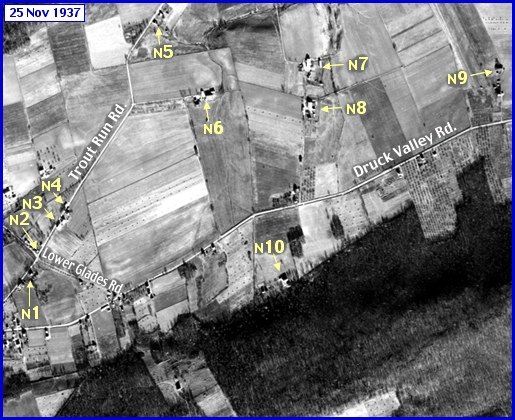 Shearer’s 1860 Map of York County  contains the owner/occupant of most buildings; for example (n9) is J. Billet. Additional information on J. Billet can be found by consulting the 1860 Census of the United States; where one discovers this is John Billet, a 51-year-old, farmer, with $4,400 in real estate holdings. 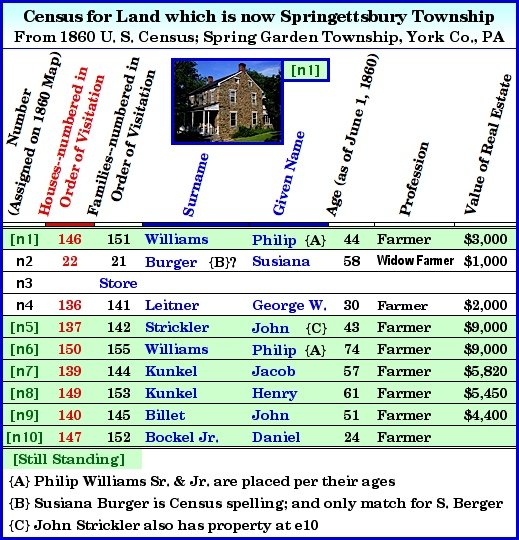 Seven of these 1860 buildings still stand at these addresses:

In May of 1989, Historic York, Inc. evaluated the property, designated as [n1] on the 1860 map and now having the address 2751 Trout Run Road. The stone house, barn and outbuildings of this classic Pennsylvania German Farm have been listed on the Springettsbury Township list of the most historically significant properties, ever since the inception of the initial list in 2001. The Pennsylvania German Farmhouse on this property is shown in the following photo.

The other structures on the property include a Sweitzer barn, stone springhouse, stable, and wooden Summerhouse with a brick chimney. Shearer’s 1860 Map of York County has very light leader lines from a few of the dots marking house locations to the owner names; such is the case for [n1] with “P. Williams, Jr.” tailing off and curving upward. The two Philip Williams in the area are placed per their age difference, via the Jr. and Sr. notes on Shearer’s 1860 Map.