At the top of this illustration, I’ve pointed out, and marked, ten 1860 buildings in the Mt. Zion and Ridgewood Road region within what is now Springettsbury Township. At the bottom of the above illustration is a 1937 aerial photo of the same region. I’ve zoomed in on the 1937 aerial photo to provide better detail in locating the 1860 properties (w1) through (w10). 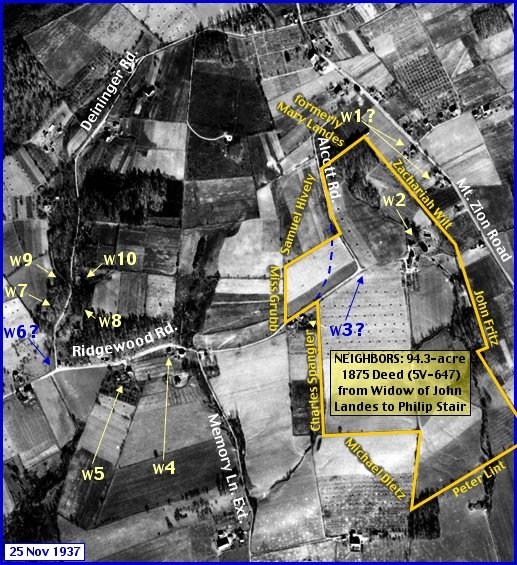 Shearer’s 1860 Map of York County contains the owner/occupant of most buildings; for example (w6) is Mrs. Water. Additional information on Mrs. Water can normally be found by consulting the 1860 Census of the United States; however Mrs. Water does not appear in the 1860 census.

Spring Garden Township 1860 Census records must be used because Springettsbury Township was formed from the northeast part of that township on April 20, 1891. The order of visitation, of the census taker, often provides assistance on who are neighbors and the tabulation of “value of real estate” separates the landowners from the renters or tenants. However in the case of properties (w1) to (w10), neither of these methods produced results.

I’ve started to assess the owners of these ten 1860 properties by plotting deeds to ascertain greater details about the 1860 property owners. As an example, I’ll start with the property at location (w2).

The 1860 map notes “Landis & Erb”. This is a business operated by John Landes (1820-1873) and Jacob Erb (1807-1878). It appears neither lived at (w2); both also owned property in other sections of Spring Garden and York Townships. Their land holdings were on both sides of Mill Creek, primarily in what is now the vicinity of the Mt. Rose Avenue intersection of I-83. Both of these men and their families were buried in the Erb Burial Plot; located near that intersection, see this link.

Beach Nichols’ 1876 Atlas of York County notes P. Stair owns the (w2) property in 1876. York County Deed Book 5V, page 647 contains the 1875 deed from the Widow of John Landes to Philip Stair. The estate of John Landes also paid off a note to Jacob Erb for $1061.72; presumably related to their business “Landes & Erb.”

On the 1937 Aerial Photo, I plotted the Metes and Bounds of the 1875 parcel and noted the neighbors at that time. Normally deeds reference the prior deed, however that was not the case with 5V-647. Next, I’ll do deed searches on the 1875 neighbors to research this vicinity further back in time.