At the top of this illustration, using Shearer’s 1860 Map of York County, I’ve pointed out, and marked, ten 1860 buildings in the Pleasureville region within what is now Springettsbury Township. At the bottom of the above illustration is a 1937 aerial photo of the same region.

This is the 23rd post in a series where I match 1860 dwellings, identified on Shearer’s 1860 Map of York County, to the families resided in them; utilizing the 1860 United States Census. This was the most challenging set of ten dwellings I have yet encountered; since only two of the ten were labeled on the map. Other sources initially added to the confusion, but ultimately the puzzle came together.

Zooming-in on the Aerial View of Pleasureville

Shearer’s 1860 Map of York County  contains the owner/occupant of most buildings; for example (w70) is __ Miller. Additional information on __ Miller can be found by consulting the 1860 Census of the United States, in conjunction with other sources; where one discovers this is Elizabeth Miller, a 72-year-old, widow farmer, with $2,400 in real estate holdings. 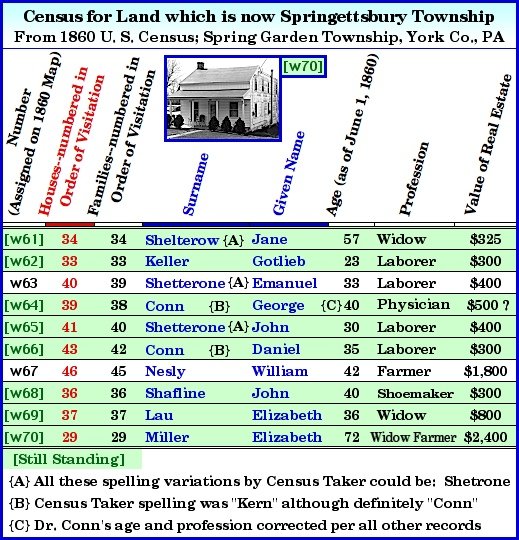 It is suspected that some or all of the 1860 structures are contained within eight of the buildings at these addresses:

Dr. George Conn was a prominent Nineteenth Century cancer doctor who practiced in Pleasureville. He initially resided at location [w64] and by 1876, he had moved into the home at location [w65]. John Gibson’s 1886 History of York County, PA contains a biographical sketch for Dr. Conn on page 187; quoting:

DR. GEORGE CONN, seventh of eleven children, of Henry and Mary (Shrum) Conn, was born August 25, 1819, in Manchester Township. He was reared on a farm and educated in Spring Garden Township. November 8, 1849, Dr. Conn married Maria Shepp, daughter of John and Elizabeth (Slagle) Shepp, of Manchester Township. Three children blessed this union: Annie Mary, wife of John Sipe; Susanna, wife of Albert J. Bower, and Alexander (deceased). When our subject was twenty-eight years of age he began the successful treatment of cancer; his success in the treatment of this loathsome disease was so marked and exceptional that he made it his life work. Many persons in York and adjoining counties in the enjoyment of health to-day can testify to Dr. Conn’s success in their cases after having failed to get relief from eminent physicians in the large cities. Dr. Conn resides in the village of Pleasureville, about three miles from York, in Spring Garden Township. His post office address is Box 509, York, Penn.

Dr. George Conn was still living in Pleasureville at the time of the 1900 United States Census. At that time he was a widower, his wife having died on August 31, 1893.

The 1860 Census Taker obviously recorded the wrong line when he re-wrote the final census ledger; i.e. that George Kern was a 34-year old Laborer. There is overwhelming surrounding documentation this is actually George Conn the 40-year old Physician. A follow-up post will be written; providing the string of evidence.