At the top of this illustration, I’ve pointed out, and marked, seven 1860 buildings in the Mt. Zion & Druck Valley Road Area within what is now Springettsbury Township. At the bottom of the above illustration is a 1937 aerial photo of the same region.

I’ve zoomed in on the 1937 aerial photo to provide better detail in locating the 1860 properties (n25) through (n31). If you are reading this on the Ydr.com site, click on this LINK for a Full View of the illustrations in this post on the original YorkBlog site; since the ydr.com site will occasionally cut off important details in the cropping of illustrations.

Shearer’s 1860 Map of York County contains the owner/occupant of most buildings; for example (n26) is J. Sipe. Additional information on J. Sipe can be found by consulting the 1860 Census of the United States; where one discovers this is Jacob Sipe (Son of Joseph), a 32-year-old, farmer, with $2,300 in real estate holdings. 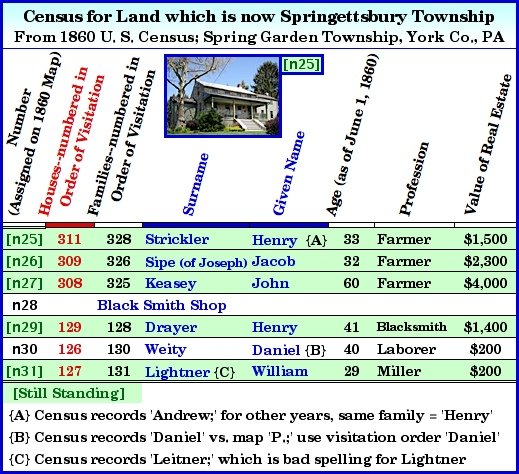 Five of the 1860 buildings still stand at these addresses:

Strickler family history research at the York County Heritage Trust unraveled a mystery. The order of visitation of the census taker along Mt. Zion Road is from [n27; visit 308] to [n25; visit 311]; which is clearly southward. The 1860 Map shows ‘H. Strickler’ as the owner of [n25], yet the 1860 census taker recorded the family headed by ‘Andrew Strickler’ as visitation 311.

Henry and Maria Strickler purchased 28.15-acres from Isaac Livingston on April 1, 1859, and build the stone farmhouse [n25]. The farmhouse has a 1859 date plaque and still stands today, along Colonial Farm Lane; a Private Lane off of Mt. Zion Road.