1830 Then & Now for a Stately House in Springettsbury Township

Did Lafayette visit this house in 1825? 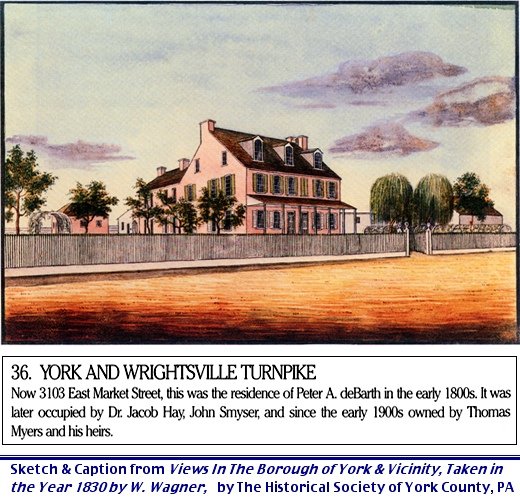 This “Then” sketch was created by William Wagner in 1830.  Credit is given to The Historical Society of York County, PA (now the York County Heritage Trust) for their 1996 publication of a collection of William Wagner sketches.  The 1830 views in the book are predominantly in the Borough of York, however a few are in the outlying vicinity; such as a view along the Turnpike West of York and this view along the York and Wrightsville Turnpike, which is now East Market Street in Springettsbury Township.

The following is the “Now” photo of the same house; i.e. the house at 3103 East Market Street.  I found a few bits of conflicting research about this house, as I was preparing the May group of Springettsbury Township properties that appear on Shearer’s 1860 Map of York County.  Thus, I jumped at the chance when invited to a walk-through; especially since York County historian Jim Rudisill was among those invited.  This property has been for sale by various realtors for years.

I showed up early for the walk-through.  Jim Rudisill had arrived earlier than me; quickly, most of the bits of conflicting research were resolved.  Jim thought the claim that Lafayette visited this house might be true; however a singular visit east of York was unlikely, since Lafayette traveled a north/south route for his visit to York in 1825.

I tried to take a “Now” photo matching the William Wagner view; however the trees and shrubs on the west side of the house were in close proximity.  The window spacing matches the sketch, except for several narrow windows added later on the west wall; likely when the house was remodeled with indoor toilets.  One can see where the brickwork was altered when the front double doors, in the sketch, were replaced with the present large single front door.  Undoubtedly Edwin Myers, of Meadowbrook fame, was responsible for additional modifications when he owned the house; possibly that is when the rear section was removed.

Some of the bits of conflicting research resulted from Peter deBarth building a house in the Borough of York prior to moving east of York.  Quoting from George Prowell’s 1907 History of York County, PA, Volume I, page 659:

Peter DeBarth, a Frenchman, erected a large two and a half story building on this lot about 1820.  He had a little store in the basement part of the building.  The Fates were not propitious with Peter, and when his property was sold … [it ultimately became] … the home of Jere Carl. 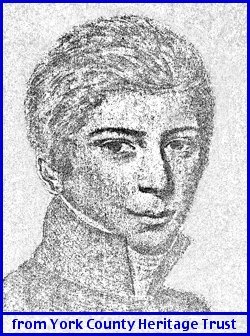 This is a drawing of Peter deBarth, dated 1820.  It comes from the collections of Nan I. Myers; the last in the line of Myers descendants to own the property.  It appears that Nan originally obtained the drawing from The Historical Society of York County, PA (now the York County Heritage Trust).

Peter deBarth’s circa 1820 home in the Borough of York was located at a site presently occupied by part of the Yorktowne Hotel.  Peter likely chose to move, due to problems with the neighbors;  at least that is my impression per the quote from Prowell.

By searching on name variations, I discovered when Peter deBarth moved via the on-line Deed Indexes at the York County Archives.  On September 27th, 1825, “Peter D. Barthe” purchases his property in Spring Garden Township; Springettsbury Township having been formed from part of that township in 1891.

That deed provided the evidence that answered the question; did Lafayette visit the 3103 East Market Street house in 1825?  The account of Lafayette’s visit to York in 1825 is given on pages 743-744 of Volume I of George Prowell’s 1907 History of York County, PA.

Lafayette visited York during February 2nd & 3rd, 1825, therefore Lafayette could have easily visited Peter deBarth’s home in the Borough of York; being only one block away from the Globe Inn on the Square, where Lafayette was staying.  Peter deBarth purchased his property east of York eight months following the visit by Lafayette, therefore a visit to the house at 3103 East Market Street likely did not occur.