In my count down of the 50 top factories in York County at the end of 19th Century, there are 12 cigar factories represented.  Celestino, Costello & Company is the eleventh cigar related manufacturer that I’ve written about thus far, in counting down the top 50.  This company has the distinction of being the top cigar manufacturer in the City of York during 1899.  Round-Up was one of their popular cigar brands.  The Cigar Crate Label is for 10,000 Round-Up Cigars from Celestino, Costello & Company.

Compared to Celestino, Costello & Company, only one other cigar factory in York County had more employees during 1899.  Do any of my readers care to guess where this factory, that made cigars and also cigar boxes, was located within York County?  I’ve already had readers guess, Dover, Red Lion & Dallastown, none of which are the correct answer in 1899.

In Polk’s 1899 York City Directory, Celestino, Costello & Company is located at 209 North Beaver Street in York.  Edwin Myers and John C. Eimerbrink are listed as the owners of this company that year.  I’ve used blue shading to pinpoint the 209 North Beaver Street location on the 1903 Atlas of York, PA; the Cigar Factory housing Celestino, Costello & Company is just north of the York County Academy.

Edwin Myers attended the York County Academy.  He organized several small-scale tobacco and cigar manufacturing businesses immediately following completion of his schooling.  At the age of 29, Edwin convinced several others to join him on a grander scale in 1873, with the establishment of Myers, Adams & Company.

Edwin Myers was president of this company from its inception in 1873 until his death in 1916.  The other principles in the company, at various times, included: Samuel I. Adams, Oscar Reinach and John C. Eimerbrink.

At the outset, Myers, Adams & Company bought and sold leaf tobacco; i.e. a wholesale leaf tobacco business.  The business was initially located on the southwest corner of North Beaver and North Streets; a rail spur ran to their tobacco warehouse.  This Leaf Tobacco Warehouse is located at the top of the 1903 Atlas illustration and is shown in the following 1893 photo.

Celestino Costello & Company was organized concurrently for the manufacture of cigars.  The initial location of the Cigar Factory may have been in the Warehouse, however cigar manufacturing soon moved to the 209 North Beaver Street building.  Celestino Costello & Company operated as a division of Myers, Adams & Company.  As the cigar manufacturing part of the business grew, the Warehouse was used less for their wholesale leaf tobacco business and more for supplying their own cigar production operations.

Edwin B. Myers was heavily involved in four cigar related businesses, plus was Vice President of York Valley Lime Company.  In addition, Edwin was on the Board of Directors of the City Bank of York, the York Water Company and York Telephone.  Edwin having been a founding board member of the York Telephone Company.

This is the same Edwin Myers that made extensive modifications to a farmhouse in Springettsbury Township in 1901, creating the Meadowbrook Mansion in the Georgian Revival style.  This mansion presently stands as Christmas Tree Hill along Whiteford Road.  Edwin used the Mansion as his summer residence through 1915.  One of Edwin’s other businesses previously appeared in the top 50; here are the related posts:

The 10th Factory Inspection Report is for the Department’s year ending October 31st 1899.  I ranked the 479 York County factories by numbers of employees; #50 has 47 employees, on up to #1 with 510 employees.  In the coming weeks, I’m counting down to the top employer in York County at the end of 19th Century.

Beside their “Round-Up” brand, Celestino Costello & Company was also known for a 10-cent cigar that they called “Little Barrister.”  They guaranteed Little Barrister’s were 100% Havana Filled.

The following page is from the Pennsylvania Federation of Labor Year Book for 1910.  The yearbook features labor details, County by County, as well as short ads from subscribers who helped get the book published. 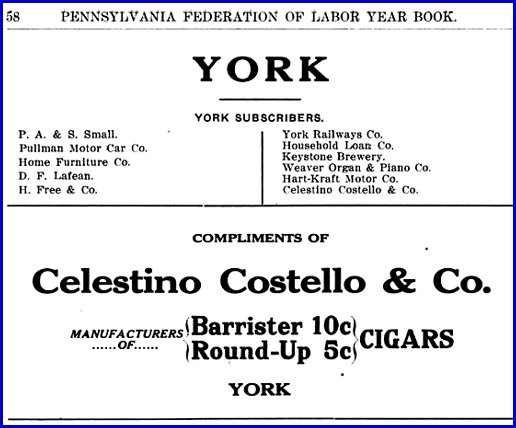 Until 1919, Celestino Costello & Company operated solely in the City of York.  In 1920, the company begins to expand into the county-side, and by 1922 they had cigar-making operations in York, Dallastown and Pleasureville.

#17 Celestino, Costello & Company in York, with 114 employees, is the eleventh cigar related factory in my count down of the top 50 York County Factories at end of 19th Century.  Previous cigar factories that have made the list include: