#16 John C. Schmidt & Company, Chain Manufacturer in York is founded by a Hall of Fame Industrialist

Several times a year, the Chicago trade publication American Artisan and Hardware Record selected a Captain of Industry that was profiled in a feature they called Hall of Fame.  John C. Schmidt of York, Pennsylvania, was given the honor in the November 1st, 1919 issue of the publication.  This photo of John Charles Schmidt is from that Hall of Fame article.

In 1899, John C. Schmidt & Company manufactured chains in York, PA.  Even though the name includes “and Company,” John C. Schmidt was the sole owner.  The #16, in the post headline, signifies that in the year 1899, there were only fifteen companies containing a work force of more employees in all of York County. 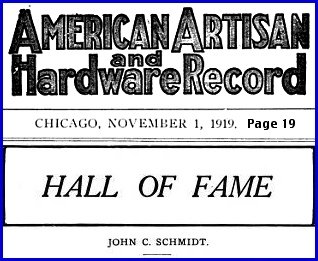 I’ve seen short news blurbs in the American Artisan and Hardware Record about their Hall of Fame Industrialists attending a dinner, in their honor, in Chicago.  I’m not sure if an accompanying dinner applied to all selections, because I could not locate such a news blurb for some of the honorees, including John C. Schmidt; however that may only indicate that these dinners were not always publicized.

The initial paragraphs of the feature on John C. Schmidt delve into metaphors expounding, “Prosperity is within the power of every normal human being.  It is gained and held by work—never by watching the clock.”  The biographical part of the 1919 article follows:

There is no mystery in the success of John C. Schmidt, President of the Schmidt and Ault Paper Company, York, Pennsylvania.  He has earned everything, which he possesses, intellectually as well as financially, by giving full values of thought and work in return.  He was born in Carlisle, Pennsylvania, March 14, 1859.  While he was still very young, his parents moved to York, Pennsylvania, where he attended a private school and the York Collegiate Institute until 1875.  Subsequently, he traveled with his parents in Europe, and spent one year in school at Stuttgart, Germany.

On his return to America, he took a position with P. A. & S. Small Company, hardware merchants of York, Pennsylvania.  He remained in their employ from 1876 to 1880.  In the latter year he went into the chain business for himself as a manufacturer in York, Pennsylvania, under the firm name of John C. Schmidt and Company.  A few years thereafter he bought out the Keystone Chain Company of York, and operated both plants until 1890, when he consolidated them in a new location in York, Pennsylvania.

About 1898, he engaged in the manufacture of paper under the name of the Codorus Paper Mills, which was some years later changed into a corporation known as the Schmidt and Ault Paper Company, of which he became and continues to be president.  Since his retirement from the chain business he has devoted himself chiefly to the manufacture and marketing of various kinds of paper.  His main point of contact with the hardware trade is through the making of sheathing paper.

He is a director in the York National Bank, the York Railways Company, and the York Gas Company, all of York, Pennsylvania.  During the war he was active in Red Cross work and served as Chief of the Chain Section of the War Industries Board in Washington, D. C.

By way of hobby, he is a florist and orchardist.  He plays golf well enough to get satisfaction out of it.  His chief pleasure, however, is in the management of his business, because through it he is constantly widening the circle of his friends.  And these he considers a precious form of riches.

Continue reading for more details about John C. Schmidt and his chain businesses.

September 29, 1881, John C. Schmidt commenced the manufacture of chain in York, the plant being located on Walnut Street, adjoining the Maryland & Pennsylvania Railroad.  This plant commenced with a force of forty employees.  The Keystone Chain Works was started a few years later by M. J. Mumper, in West York, and when this firm went out of business, John C. Schmidt bought all of their assets and operated the works.

John C. Schmidt operated these two plants separately for several years and then consolidated in 1890 the two plants in one large plant located on the Pennsylvania Railroad, near Vine Street. [Per present landmarks, this one large John C. Schmidt plant, built in 1890, was on the northwest corner of State Street and the railroad tracks, i.e. north of, and on the far side of the railroad tracks from Alexander Goode Elementary School.]

Discussions to consolidate chain factories throughout the Eastern United States and Canada commenced in 1899; John C. Schmidt was one of the individuals driving the merger movement for chain manufacturers.  Another York, PA chain manufacture was also in favor of consolidation; interestingly, Charles I. Nes, of #22 Nes Chain Manufacturing Company, learned the chain manufacturing trade while an employee of John C. Schmidt & Company for three years.  After 10-years of head-to-head competition, Schmidt’s company remained larger, although Nes’s company had reached a respectable sized and was only 20 employees smaller than the senior firm.

John C. Schmidt was elected President of the Standard Chain Company and was a Director.  His local competitor, Charles I. Nes, also became a Director.  J. T. Davis was selected as the General Manager with control over all the plants.

Through consolidation, the Nes Plant was eventually selected as a location for expansion; buildings started to be added heading west along East Princess Street.  At that time a large undeveloped parcel of land still lay to that side of the Nes Plant.

In 1917, more consolidation occurred in the chain industry, the Standard Chain Company becomes part of American Chain and Cable Company.  As in the past, the East Princess Street Plant is selected for expansion, to accommodate a consolidation of other plants.  Buildings were erected until all available property for expansion had been built upon.  The following 1957 Aerial View of the ACCO Plant along East Princess Street is from a York Chamber of Commerce publication.

The eventual solution to an aging factory in a confined area resulted in the acquisition of a much larger parcel of land in York Township.  After moving to the new ACCO plant, the East Princess Street plant fell into neglect.  It was eventually torn down, however one building was saved and redeveloped.  Cable House Apartments now occupy the building marked in orange.  This 84-unit complex was developed by York Area Development Corporation to provide housing for low-income families.

A review of my count down, thus far, of the 50 top factories in York County at the end of 19th Century follows.  As a group, these 35 factories provided employment for 2,706 people in York County during 1899.