In 1899, the Wrightsville Hardware Company had been manufacturing hardware and iron novelties for 19-years.  The #15, in the post headline, signifies that in the year 1899, there were only fourteen companies containing a work force of more employees in all of York County.

A line-up of products, produced by Wrightsville Hardware Company around the turn of the last century, can be seen in this advertisement, appearing in the May 1903 issue of the trade publication, The House Furnishing Review.

Every issue of the House Furnishing Review also reviewed a few catalogues of their advertisers.  On page 361 of this same issue, the Wrightsville Hardware Company catalogue was reviewed as follows:

Among the interesting trade publications which has found its way into the Review office is the illustrated catalogue of the Wrightsville Hardware Company, of Wrightsville, Pa., iron founders and manufacturers of hardware, house furnishing goods, and toys.  The first section of the book is devoted to builders’ hardware, followed by a line of bed castors, draw pulls in a variety of patterns, paper files, anvil paper weights, calendar stands, meat pounders, shelf brackets, tobacco cutters, Mrs. Best’s sad irons, Troy polishing irons, hat and coat hooks, hatchets, hammers, can openers, fish scalers, and other handy house tools, sundry garden and carpenters’ tools and a long list of toy irons, tools, jack stones, etc.  The book is most tastefully gotten up, and will be forwarded by the firm on application.

A few items appearing in the ad, that were not mentioned in the review, include: iron penny toys of all kinds, tack hammers, bird cage hooks, clothes line hooks, coffee pot stands, dumb bells and boot jacks.  Continue reading for more details about the Wrightsville Hardware Company.

The Wrightsville Hardware Manufacturing Company was established in 1880, with Colonel Magee as president, and George K. Shenberger as secretary and treasurer.  It was capitalized at $5,000, and conducted at first on the co-operative plan.  The first foundry building was 50 x 60 feet in dimensions, and employment was given twelve molders.  The original building has given place to modern brick structures, and today [1907] about two hundred and twenty-five men are employed.  During the first year the output was valued at $17,000; now it reaches to $260,000.  Although Mr. Henry McElroy did not become manager until 1893, he had virtually been in control of the business since 1888.

The following illustration shows the Wrightsville Hardware Company buildings on a 1909 Sanborn Fire Insurance Map.  This map provides type of building construction, Yellow for Wood Frame and Red for Brick are dominant, and gives general usages of each individual building. 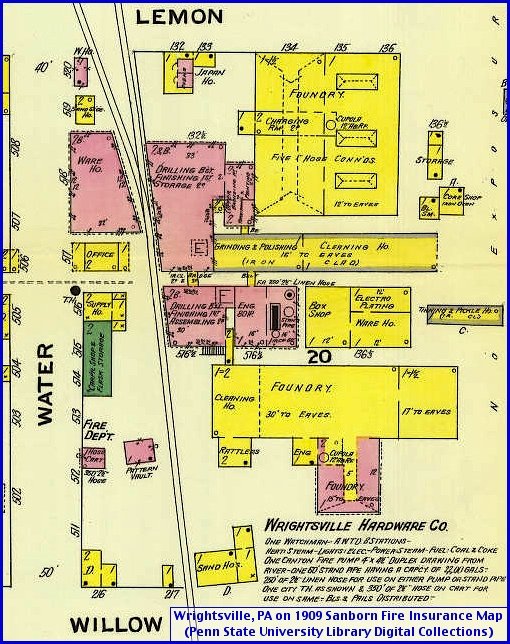 Penn State has many of the older Sanborn Fire Insurance Maps available on-line at this link.  These cover Pennsylvania, although they are primarily restricted to urban areas.

The link, to go directly to the map containing the Wrightsville Hardware Company, is here; then select Sheet 5 in the right column.  This allows one to zoom-in to see greater detail or look at other areas of Wrightsville.

A review of my count down, thus far, of the 50 top factories in York County at the end of 19th Century follows.  As a group, these 36 factories provided employment for 2,836 people in York County during 1899.