#14 Baugher, Kurtz & Stewart; The Prominent Foundry along the Codorus in York

At #14 in the count down of the Top 50 York County Factories at End of 19th Century is Baugher, Kurtz & Stewart in York, PA. The 10th Factory Inspection Report, from the Pennsylvania Department of Factory Inspection, notes that on May 15th 1899, Baugher, Kurtz & Stewart has 140 employees; all male. Of these 140 employees, 17 employees are under 21-years-old, of which 3 are between 13 and 16-years-old. The goods manufactured are recorded as “Iron & Brass Castings.”

The site of this iron and brass foundry in York was along the west side of Codorus Creek, straddling West Philadelphia Street. I’ve pointed out the location of some of their key foundry buildings on the present photograph of the Codorus Boat Basin & Foundry Plaza.

The foundry site was on the north side of West Philadelphia Street; it is now the location of Susquehanna Commerce Center’s two 6-story office buildings. The pattern storage buildings still stand along the south side of West Philadelphia Street; the Waterway Bar & Grill is the present primary occupant. A flask storage building was located in the area of the present Boat Basin. Flasks hold together sand molds after receiving the impression of the wooden pattern.

The following photo of a neat plaque, on the wall of the Boat Basin, explains several steps in the casting process. 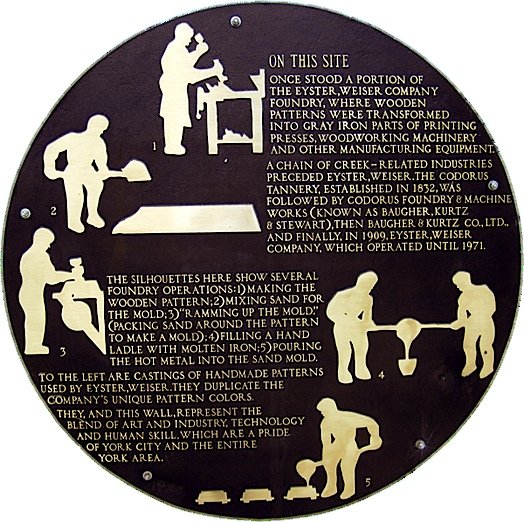 The plaque also contains a short history of this site:

On this site once stood a portion of the Eyster, Weiser Company foundry, where wooden patterns were transformed into gray iron parts of printing presses, woodworking machinery and other manufacturing equipment.

A chain of creek-related industries preceded Eyster, Weiser. The Codorus Tannery, established in 1832, was followed by Codorus Foundry & Machine Works (known as Baugher, Kurtz & Stewart), then Baugher & Kurtz Co., Ltd. and finally, in 1909, Eyster, Weiser Company, which operated until 1971.

To the left [on the north wall of the Boat Basin] are castings of handmade patterns used by Eyster, Weiser. They duplicate the company’s unique pattern colors. They, and this wall, represent the blend of art and industry, technology and human skill, which are a pride of York City and the entire York area.

Continue reading as I expand upon the history of this progression of companies by use of maps, ads and photos.

The 10th Factory Inspection Report is for the Department’s year ending October 31st 1899. I ranked the 479 York County factories by numbers of employees; #50 has 47 employees, on up to #1 with 510 employees. In the coming weeks, on Monday, Tuesday or Wednesday, I’m counting down to the top employer in York County at the end of 19th Century.

At #14 in the count down of the Top 50 York County Factories at End of 19th Century is Baugher, Kurtz & Stewart with 140 employees. Only 13 factories in all of York County, during 1899, had more employees.

I’ve done all the look-up work for you in the following side-by-side Sanborn Fire Insurance Maps showing the foundry and tannery locations on the west side of the Codorus Creek during 1887 (on the left) and 1908 (on the right). However if you want to do some look-ups yourself; the specific links follow.

In 1887 the operations of Baugher, Kurtz & Stewart stretched along the west side of Codorus Creek from West Market Street to West Gas Alley. The primary identifications are “Baugher, Kurtz and Stewart; Foundry and Codorus Tannery” and “Codorus Iron Works and Tannery.”

In 1887, the tannery was located between West Market Street and West Clark Avenue; it contained buildings identified as: Vats, Steam Vats, Rolling, Leaches, Dry’g, Beam Ho. And Ware Ho.” In 1908, the tannery no longer existed; an auto garage was located in some of these buildings. 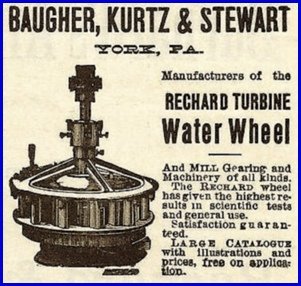 Frederick Baugher established the Codorus Tannery in 1832. The 1892 catalog lists Machinists and Tanners; that is the last reference I’ve seen about the tannery. The 1899 Factory Inspection Report does not list a tannery as being part of this business. I suspect the tannery shut down in the early 1890s.

Next five paragraphs are a November 2021 Update:

When Frederick’s son George F. Baugher took over the tannery, he also began operating a Machine Shop. Newspaper research associated with the Baugher & Bro. bell and an examination of Baugher family history, points to the other son of Frederick Baugher, foundry man Jacob U. Baugher, as the person responsible for ultimately originating the foundry part of the business as Baugher & Bro., late in 1869.

In November of 1869, Slaymaker & Durkee, operators of the Old York Foundry on the corner of Newberry and King Streets, dissolved their firm by mutual consent. The Works of A. B. Farquhar acquired the pattern equipment of Slaymaker & Durkee’s best selling farm equipment. George F. Baugher acquired other items from the Slaymaker & Durkee going-out-of-business sale; most notably the foundry and most machine shop equipment, which were moved to the Baugher commercial lot, adjacent to the west side of the Codorus Creek and north of Market Street.

Jacob U. Baugher had been a foundry man at Slaymaker & Durkee. The new foundry on the Baugher lot, was operated by the brothers George Baugher and Jacob Baugher; as Baugher & Bro.; however Jacob was primarily in charge of the foundry, since George continues to mainly focus on the Tannery part of the business. Unfortunately the untimely death of Jacob Baugher on February 21, 1872 resulted in the very short span for the Baugher & Bro. business; 1869 to 1872.

In 1881, the foundry operations of the business were moved to expanded quarters; a block north, along the west side of the Codorus Creek, so that they straddled Philadelphia Street. Then in 1886, W. F. Bay Stewart became a partner; and the business was known as Baugher, Kurtz and Stewart. A change of ownership occurred in 1894, however the Baugher, Kurtz and Stewart name was retained.

In 1899, George U. Weiser became a partner and the Company name was changed to Baugher & Kurtz Co. Ltd. At that time, John Strickler was President, George U. Weiser was Secretary & Treasurer, and William Eyster was General Manager. In 1904, Frank A. Eyster joined the firm; at which time the Eyster-Weiser Company name was adopted. The foundry continued under the direction of Eyster and Weiser descendants until shutting down in 1971.

Publications of the York Chamber of Commerce contain the following photos of the Eyster-Weiser Company; showing their buildings on the north side of West Philadelphia Street.

A review of my count down, thus far, of the 50 top factories in York County at the end of 19th Century follows. As a group, these 37 factories provided employment for 2,976 people in York County during 1899.