At #13 in the count down of the Top 50 York County Factories at End of 19th Century is the Hanover Match Company in Hanover, PA. The 10th Factory Inspection Report, from the Pennsylvania Department of Factory Inspection, notes that on July 13th 1899, the Hanover Match Company has 143 employees; 31 male and 112 female. Of these 143 employees, 75 employees were under 21-years-old, of which 4 male employees and 12 female employees were between 13 and 16-years-old. The goods manufactured are recorded as “Matches.”

Polk’s York City and County Directory of 1898 (page 544) lists the Hanover Match Company as the only match company in York County. The company is located at 438 Middle Street in Hanover. This site is located on the southwest corner of East Middle Street and the railroad tracks. 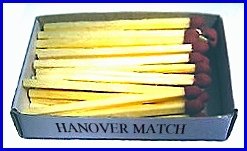 The product flow, for producing a box of wooden matches, begins in the upper left buildings where wood is cut and split into individual sticks. The manufacturing operations results in an eastward product flow, through the various buildings: drying the sticks, dipping the ends of the sticks into the chemicals, drying the matches and finishing in the building adjacent to Middle Street where the matches are packed and boxed.

In 1892, the Hanover Match Company partnership attracted a major investor, P. H. Glatfelter, along with his new son-in-law Charles E. Moul. Their investment in the partnership resulted in the growth of the factory to the size seen on the 1896 Sanborn Fire Insurance Map.

The American Machinist, issue of July 28, 1898, notes the capacity of the Hanover Match Company factory is to be doubled again. The Gettysburg Compiler, issue of August 2, 1898, notes the factory has been running at its full capacity, employing 340 persons; which is the reason the large addition is to be built at once.

Continue reading for additional details about Hanover’s loss of their Match Company and learn what manufactured product sprung up in its place. Hint, it has a round about connection to a Christmas Eve factory whistle concert.

The 10th Factory Inspection Report is for the Department’s year ending October 31st 1899. I ranked the 479 York County factories by numbers of employees; #50 has 47 employees, on up to #1 with 510 employees. In the coming weeks, on Monday, Tuesday or Wednesday, I’m counting down to the top employer in York County at the end of 19th Century.

The Match Trust Will Get Possession of the Hanover

The probabilities amounting to almost a certainty, are, that another of Hanover’s industries will be gobbled up by a trust.

Although the Record’s information yesterday, obtained from a member of the local company, was exactly the opposite it is now an assured fact that negotiations have been pending for some time between the Hanover Match Company and the Diamond Match Company for the acquisition of the former company’s plant by the latter, with a likelihood of an early consummation of the deal.

The employees of the Hanover Match Company were informed by the management yesterday afternoon that in all probability the deal would be closed by August 1, and the employees were advised to procure situations elsewhere, if possible, in the meantime.

This is unpleasant information for the people of Hanover, for the local match factory is one of the town’s most flourishing and appreciated industries. While we have been unable to ascertain whether the works, after the match trust secures control, will be closed entirely, the action of the management in advising their employees to seek employment elsewhere is an almost sure indication that the closing of the factory will ensue.

The match factory employs from 100 to 150 persons, and the pay roll aggregates about $350 or $400 per week. The members of the company at present are: Messrs. P. H. Glatfelter, of Spring Grove, and Charles E. and Martin Moul, of this place. The factory was put into operation in 1889, and continual additions and improvements have since been made to the works, until now the plant is the largest industrial establishment in the town, and splendidly equipped.

After closing down of the Hanover Match Company, Charles E. Moul established the Hanover Sewing Company in the former match company building immediately adjacent to Middle Street; this company evolved into the Hanover Shirt Company. Martin Moul had other business interests to keep him occupied; he was a dealer in lumber, coal, roofing supplies and was President of the Fitz Water Wheel Company. 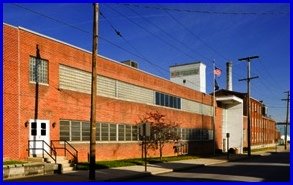 This is a present northward view along East Middle Street in Hanover. The railroad tracks cross Middle Street at the right edge of this photo. The darker brick building in the distance is the original Hanover Match Company building that faced Middle Street.

Today this is the last of the New York Wire factories that operated in York County. The Mount Wolf factory closed in 2010 and the York factory closed in 2012. I previously wrote about the York factory in my count down of the Top 50 York County Factories at the end of 19th Century: #26 New York Wire Cloth Company in York; Original Home of the Christmas Eve Factory Whistle Concert.

A review of my count down, thus far, of the 50 top factories in York County at the end of 19th Century follows. As a group, these 38 factories provided employment for 3,119 people in York County during 1899.