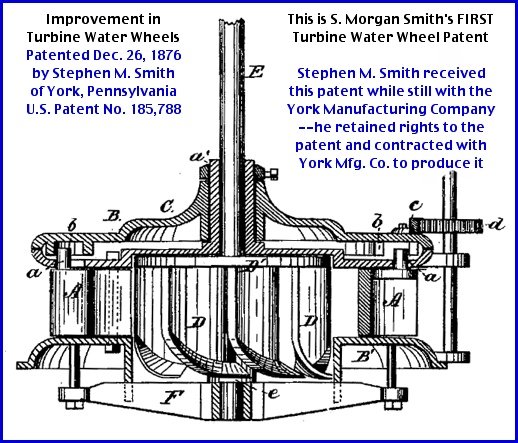 Note the application for this patent was filed on December 9, 1876 and Patent No. 185,788 was granted on December 26, 1876. That is 17-days to go through the patent review and approval process at the United States Patent Office. Unheard of speed, compared to today; i.e. my fast-track patent took 1-year, 11-months, while all my other patents took slightly less then 3-years for the review and approval process.

In most cases, a start-up company marks the year they are established, by when they have their first customer.  Early S. Morgan Smith product catalogs note “Established 1877.” The Mill of Amos G. Jacobs in Paradise Township, York County, was that first customer of Smith’s newly parented “Success” turbine in 1877. Jacobs Mill was located at the current crossroads of Jacobs Mill Road and Beaver Creek Road; the mill no longer stands. Some erroneous information on the founding year of S. Morgan Smith Company is at this link.

At #10 in the count down of the Top 50 York County Factories at End of 19th Century is the S. Morgan Smith Company in the west end of York. The 10th Factory Inspection Report notes that on May 15th 1899 the S. Morgan Smith Company in York has 166 employees; all male. Of these 166 employees, 20 employees are under 21-years-old. The goods manufactured are recorded as “Water Wheels.”

Oliver J. Bollinger resigned from the York Manufacturing Company to start his own company late in 1875, to produce his new and improved turbine water wheel; which he received a patent on June 1st, 1875. Bollinger’s original 1870 Turbine Water Wheel became an orphan within the York Manufacturing Company, and without any further improvements, it was expected sales would plummet with Bollinger’s improved turbine water wheel as a competitor.  S. M. Smith stepped in and took charge of this product.  Throughout 1876, S. M. Smith worked on improving the Turbine Water Wheel.  Smith gathered ideas for improvements from other turbine water wheels on the market and input from local millwrights, such as Jesse Krall, and applied for a patent on those improvements; i.e. the patent shown at the beginning of this post.

S. M. Smith resigned from the York Manufacturing Company in 1880, focusing on the further development of his turbine water wheels. His 1877 through 1880 ads indicated to send orders to S. M. Smith, York, Pa. Starting in 1881, the use of S. Morgan Smith first appears in directories and ads. Throughout the 1880s, Smith utilized several York machine shops, including the York Manufacturing Company, to manufacture his turbine water wheels. In 1890 Smith built a 50-foot by 150-foot facility at 500 Lincoln Street, as he begins to do his own manufacturing, and in the years to come, many additions were added, plus the factory was rebuilt; as the company grew.

An early history of the S. Morgan Smith Company is told in George Prowell’s 1907 History of York County, PA. Quoting from page 760 of Volume I:

About 1876, Mr. [Stephen Morgan] Smith turned his attention to hydraulics, and soon afterward invented the “Success” turbine, which has been well and favorably received by the milling interests. Other lines of business were taken up from time to time, and improvements made on this turbine water wheel, until at the time of his death his manufacturing establishment, devoted to the building of turbine water wheels and power transmitting machinery, was the largest of its kind in the country.

In 1898, Mr. Smith organized the S. Morgan Smith Company, the management of which was largely turned over to his sons, while he spent much of his time in rest and travel. It was while on one of his visits to his son, Beauchamp, in Los Angeles, California, that he was taken suddenly ill with an attack of heart failure, and died April 12. 1903.

The following images are from a nineteenth century S. Morgan Smith letterhead. The letter, dated July 5, 1894, is from the collections of the York County Heritage Trust. A westward view of the factory is shown; by 1894, considerable buildings have already been added since the original 50-foot by 150-foot facility was built in 1890.

Precision Components Corporation (PCC), one of several York area offshoot businesses of S. Morgan Smith Company, is presently located at the site of the original the Smith factory. Their location can best be described as bounded by North Hartley Street, Manchester Street, N. West Street and Linden Avenue, with Lincoln Street bisecting the property.

Continue reading for more details on S. Morgan Smith and the various offshoot businesses of his company.

The 10th Factory Inspection Report is for the Department’s year ending October 31st 1899. I ranked the 479 York County factories by numbers of employees; #50 has 47 employees, on up to #1 with 510 employees. In the coming weeks, I’m counting down to the top employer in York County at the end of 19th Century. At #10 in the countdown is S. Morgan Smith Company.

S. Morgan Smith’s life prior to his venture into hydraulics is covered in the following posts:

Several readers have questioned where S. Morgan Smith lived after he left the York Manufacturing Company in 1880. The 1880 U. S. Census records S. M. Smith as residing at 343 West King Street in York, PA. York City Directories have Smith continuing to reside at 343 West King Street until just prior to 1894. By 1894, S. Morgan Smith resides on West Market Street, near Richland Avenue. The location of the S. Morgan Smith’s Estate on West Market Street can be pinpointed utilizing the 1903 Atlas of York, PA.

I’ve shaded the location of the home, where S. Morgan Smith lived for the last ten-years of his life. His home sits right in the middle of the Barley Autumn House West complex at 914 West Market Street. York area offshoot businesses of S. Morgan Smith Company are summarized in my following time-line chart: 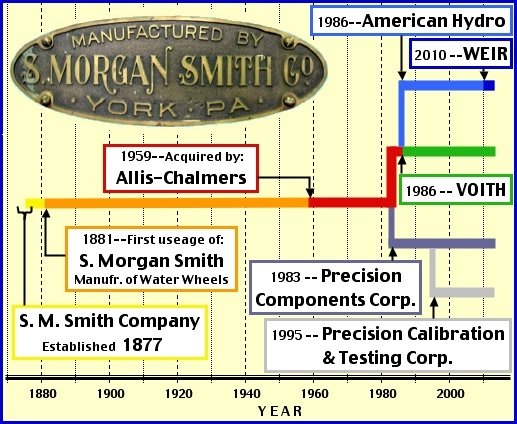 A review of my count down, thus far, of the 50 top factories in York County at the end of 19th Century follows. As a group, these 41 factories provided employment for 3,593 people in York County during 1899.