John Gibson’s 1886 History of York County, PA, contains an early history of the company on page 566:

The Pennsylvania Agricultural Works, which have grown gradually, until they are now among the most important manufacturing industries of Pennsylvania, are located on North Duke Street, and cover an area of four acres. A great variety of agricultural machinery is made here, and shipped to all parts of the Union, and very extensively manufactured for foreign trade. From 200 to 400 workmen are employed, thus making it a very valuable enterprise to the town of York.

A. B. Farquhar, the proprietor of these large works, was born in Maryland, in 1837 [actually 1838]. He came to York in 1855 [actually 1856], and was in the employ of Dingee & Co., then the largest manufacturer of agricultural implements in York; at the expiration of three years he became a partner. The works were destroyed by fire in 1861, but were immediately rebuilt, and in 1862, Mr. Farquhar became sole proprietor. His prosperity continued until 1875, when the establishment was again almost burned down.

A. B. Farquhar immediately rebuilt the factory following the 1875 fire and was again producing agricultural implements and steam engines, such as those shown in this 1881 ad. Many of these early steam engines were hauled around by horses and used to power everything from threshers to saw mills.

The top of the ad notes A. B. Farquhar received Metal and Highest Award of Merit at Centennial. This is a reference to the six-month-long International Centennial Exhibition in Philadelphia during 1876.

The bottom of the ad notes The Farquhar Separator (thresher) received the Highest Prize Awarded for Separators and The Silver Medal at Paris Exposition. This is a reference to the Paris World’s Fair of 1878, where the just completed head of the Statue of Liberty was showcased.

This ad is typical of many ads of the 1880s; a lot of information is packed into a small space. One has to turn the ad side-ways to the right and to the left, to read all the text. For this post, I’ve enlarged the ad, since one almost needs a magnifier to read some of the copy; the actual ad is 2-1/4 inches wide.

This is a northwest looking view of A. B. Farquhar Company, along North Duke Street in York, during approximately 1900. The 1899 York City Directory notes the address of this business is 142 North Duke Street, and the officers and managers of the company are the father and his three sons: 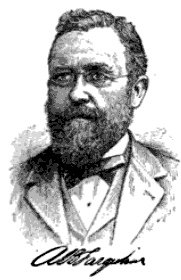 This sketch of Arthur B. Farquhar is from page 209 of Volume II, Cyclopedia of American Biography, published by James T. White & Company in 1892. Arthur was born in Montgomery County, Maryland, on September 28, 1838. His great-grandfather, William Farguhar, emigrated from Scotland about the year 1700 and settling in Frederick County, Maryland.

A. B. Farquhar was educated at Benjamin Hollowell’s Select School for Boys, at Alexandria, Virginia. Authur must have really liked going to this school; he named his middle son accordingly. After leaving school he showed a taste for mechanics, which was fostered by his father, William Farquhar.

In 1856, Arthur came to York to learn the machinist’s trade at W. W. Dingee & Company, and within several years became Dingee’s partner. During the factory rebuilding, following an 1861 fire, Dingee accepted a job as chief thresher designer for J. I. Case Company in Racine, Wisconsin, and Farquhar became the sole owner of the company in 1862.

Following an 1875 fire, A. B. Farquhar rebuilt the factory buildings using predominantly brick and iron, with slate or metal roofs. The plant had its own system of water mains and hydrants, along with a system of sprinkler pipes in the woodworking shops. Farquhar was determined to avoid any additional fires.

This A. B. Farquhar Company invoice is dated April 3, 1897. The factory illustration within this invoice is shown as a northwest looking view. Other invoices and letterheads of the 1890s are similar, all having slightly fewer buildings than the c. 1900 bird’s eye view earlier in this post, but more buildings than on an 1887 Sanborn Fire Insurance Map. J. C. Leib & Company in Stewartstown paid their bills in a timely manner; the whole 48-cent bill was paid four days later.

Continue reading to discover the Farquhar Park connection and learn what happened to the company.

The 10th Factory Inspection Report is for the Department’s year ending October 31st 1899. I ranked the 479 York County factories by numbers of employees; #50 has 47 employees, on up to #1 with 510 employees. Over the last two years, I’ve counted down and written about the top 50 factories to finally reach the top employer in York County at the end of 19th Century; A. B. Farquhar Company.

A. B. Farquhar formally donated a plot of land that he owned in the northwestern part of the City of York to the city on August 21, 1897. Arthur had actually created Farquhar Park in the 1880s and even built a pavilion for the free use by city residents. Rampant vandalism had ruined the park and the pavilion by the mid-1890s.

Mr. Farquhar agreed to deed the property to the city in 1897, provided they promised to patrol it and take care of the park. This resulted in the formation of the City Parks Commission, to do just that.

Arthur Briggs Farquhar died on March 5, 1925. The A. B. Farquhar company continued under the control of his youngest son Francis Farquhar.

This is a southeast looking view of A. B. Farquhar Company in York, during approximately 1940. I’ve added the street names for easier orientation. The view is from exactly opposite the direction of the c. 1900 viewpoint at the beginning of this post. The predominant expansion that occurred between these two views is the growth south to and beyond E. Gas Avenue; shown on the upper right side of this illustration.

This illustration is from a York Plan booklet at the York County Heritage Trust. During WWII, this factory predominantly produced smokeless powder presses, decontaminating units, material handling conveyors and 81mm mortars and mounts.

In December, 1951, A. B. Farquhar Company was sold to the Oliver Corporation, becoming the ninth plant in their organization. Eventually Oliver started to consolidate York plant operations to their other plants. By the time White Motor Corporation acquired Oliver Corporation in 1960, all production had been moved out of the York plant; as a result, the York plant was not included in the acquisition by White. For a decade, these buildings suffered demolition by neglect. When the buildings had reached the state of becoming a nuisance, they were taken down about 1970.

I’ve marked the following 2015 Eastward Looking Bird’s Eye View with the Factory Footprint of the A. B. Farquhar Company factory, as it existed circa 1940. Besides all the parking spaces, two buildings now occupy the area where The Pennsylvania Agricultural Works was once located.

The following is a final list of my count down of the 50 top factories in York County at the end of 19th Century follows. As a group, these 50 factories provided employment for 6,215 people in York County during 1899.