York Daily Record/York Newspaper Co.: A retirement and other news from around 1891 Loucks Road – and beyond 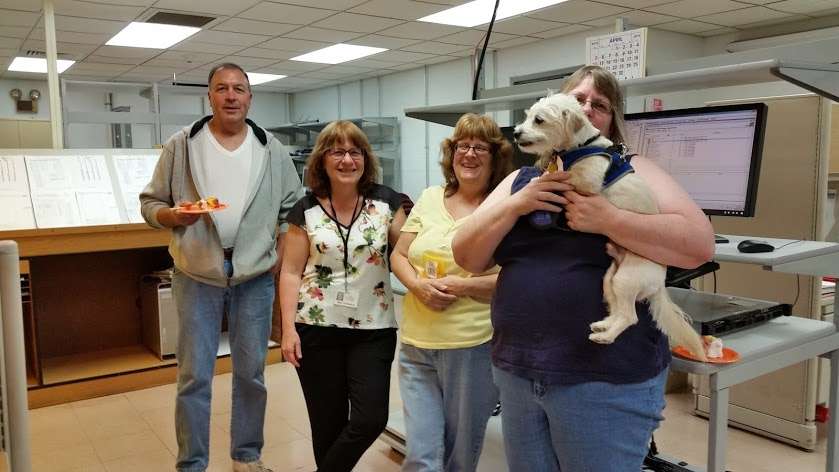 Composing’s Mary Jo Cataldi, second from left, is seen with co-workers at her retirement party this week. She started with the company 27 year ago. What will she do in retirement? She wrote in an email: ‘Plan to spend more time with my husband (we were married on September 19, 2014), volunteer work, work on CSA farm crew, travel (New Mexico, Florida, Canadian Rockies train trip, Hawaii….), enjoy time with my 4-year-old granddaughter, and soon-to-be granddaughter (due May 22), sleep like a “normal person.” ‘ Also pictured are, from left, Dave Bosserman, Jane Reitz and Darlene Swords (with her dog, Harley).

+++
Steve Buttry, a former York Daily Record colleague, named the YDR as a site he looked in on in updating a blog post: Updated tips for Facebook engagement by newsrooms .

We’ll take that indirect shout-out from such a respected journalist with much appreciation.

Ashley May: Hanging with Caroline Rose at a Revs game.

The lovely editor of the FlipSidePA.com and I in today’s newspaper!! 🙂

+++
Just a little goofy: And can’t believe it was a year ago that this group met in DFMies in St. Paul.