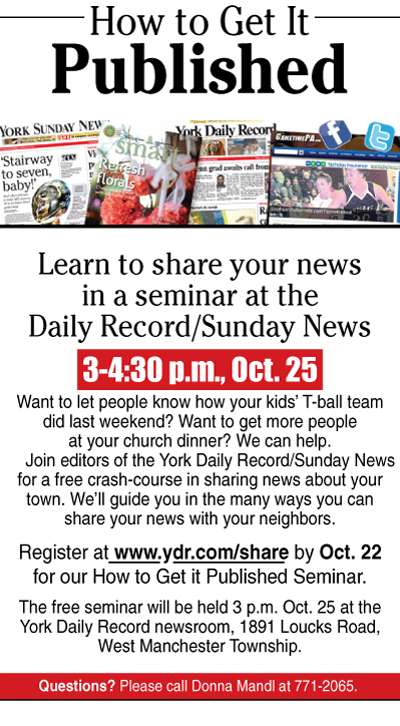 The York Daily Record/Sunday News’ “How to Get It Published Seminars” are an example of the way the newsroom engages with the public. Contact dmandl@ydr.com if you plan to attend.

This is the seventh year of this statewide award competition. The YDR/YSN has won first place five times and second place twice.

PNA says the award honors efforts by Pennsylvania member newspapers that accept the challenge and create a community of readers, through innovation.

“This award recognizes innovative efforts that result in the contributions to the advancement of readership,” PNA’s website states.

Here’s how we summarized our winning entry: “Through all of these avenues, we have reached and engaged our readers in new ways. These innovations have allowed us to successfully grow new readership, young readership, existing readership and non-traditional readership. With the help of our advertising, sales and circulation departments, we continue to promote and monetize our efforts while allowing our readers more access to more information than ever before.”

We’re proud to receive this award. In seeing the entry every year, it reminds you how hard our staff works to engage with our readers. To give you a flavor of this award, check out what I said in accepting the trophy last year: Community engagement key goal in initiatives that scored YDR statewide award .

We also won three awards in the William A. Schnader Award competition for reporting on the law.

This is a prestigious competition across the state for journalists who do the best job in reporting on legal matters.

Rick Lee – First place beat in 49,000-plus circulation category, for stories about the Craver jury picked in secret, how the court system deals with young victims, and a story regarding the Michael Helfrich case.

Mike Argento – First place editorial/commentary, for editorials on tweeting in court and dangers missed in a domestic murder case.

Rick Lee and Emily Opilo – First place Special Report/Series for a series of stories on the legal ramifications surrounding the Michael Helfrich case.

Also, the YDR/YSN staff won awards in 7 out of the 11 categories in Newspaper of the Year competition.

Best Use of Photography — honorable mention

And it’s nice when our sister newsrooms across the region win Newspaper of the Year awards:

-The Hanover Evening Sun won a second place in newswriting in Division III.
– The Chambersburg Public Opinion won 1st place in Division IV in editorial/opinion page excellence, honorable mention for best use of photography and second place for online presence.