York Daily Record/Sunday News – Pa.’s Newspaper of the Year – is running with the big dogs 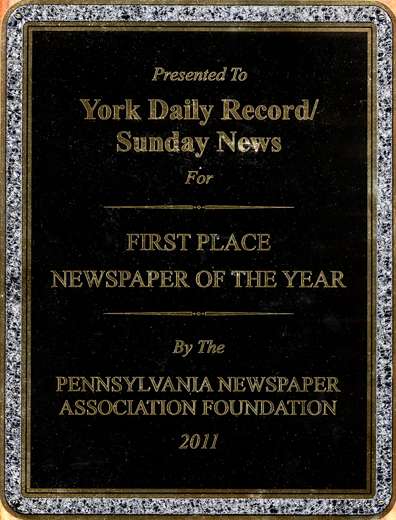 In the past 10 years, the York (Pa.) Daily Record/Sunday News has won two firsts – including this year’s award – and two seconds in Pennsylvania Newspaper of the Year competition. For more on the news organization’s honors, visit YDR Insider’s awards page.

I had the honor of accepting PNA’s Newspaper of the Year Award at the recent publisher’s convention.

Thank you for this coveted Newspaper of the Year award.

It’s even more meaningful when you consider the quality of  news organizations in the state that we’re up against. Look what the Patriot-News is doing with the Penn State story. I feel like we’re running with the big dogs today.

When we last won this award, I know I just paused for a moment realizing that this is a once-in-a-lifetime honor, and I wanted to take it all in.

I can say thanks to the journalists at the York Daily Record/Sunday News for providing another moment.

You’ve heard that our editorial page editor Scott Fisher was honored earlier in this program with a William A. Schnader Print Media Award, and you heard from him a few minutes ago accepting the Public Service Award for the YDR/YSN.

Well, it was a beautiful Fourth of July morning in 2010 when Scott Fisher was observed in his office working on either a Viewpoints takeout on York County First Amendment champions in connection with the Snyder v. Phelps -Westboro Supreme Court case. That was the case of this alleged church, Westboro Baptist, demonstrating at the funeral of a brave Marine with York County ties.

Or perhaps he was working on a piece he wrote about the use and abuse of ARD to assuage police officers who were in trouble with the law, particularly  DUIs.

No matter, these were pieces of his winning Schnader entry, and the moment points to the creativity and determination and resolve and just plain old-fashioned hard work demonstrated daily – nowadays just about 24-7 – by York Daily Record/Sunday News staff. And yes, holiday mornings as well. We thank Scott for his effort.

To adapt a line from one of our editors in accepting an award a couple years ago: Much of what we do is hard, very hard. But we choose to do it because it is hard. That relates to our commitment to work, too.

And one other point to make because moments like this one are so rare:  Much of the content that won this award was published first on the web and then conveyed to mobile and tablet devices – called digital first. Then it was republished on newsprint – in the York Daily Record/Sunday News.

I can say with certitude that all the journalists in our newsroom have digital duties – with 100 percent buy-in that digital is our future.

So perhaps this award – this highly prized trophy – could be renamed Digital Newspaper of the Year… .