Posted by YDR InsiderJune 23, 2015 Behind the scenes, Editor, News coverage

York Daily Record’s oldest forerunner first published in 1796. Or was it 1795? 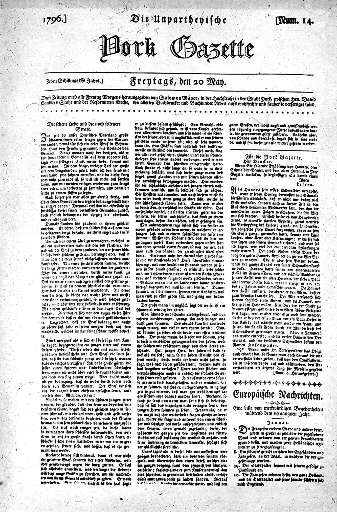 The earliest known copy of Die York Gazette is dated May 20, 1796, No. 14. If you back up 14 weeks – assuming weekly publication – that means the German-language newspaper started in early 1796. Longtime Gazette & Daily owner J.W. Gitt maintained the newspaper, forerunner to his publication and the York Daily Record – first published in 1795.

The York Daily Record/York Sunday News has been in the news because it has a new owner – Gannett Co. Inc.

So for those seeking a little background on the new owner or a little history about the YDR’s oldest parent, this story will give you a little of both: “Solomon Meyer founded Die York Gazette, but his newspapering went downhill from there.”