Posted by YDR InsiderApril 7, 2014 Awards and honors, Behind the scenes, Photography 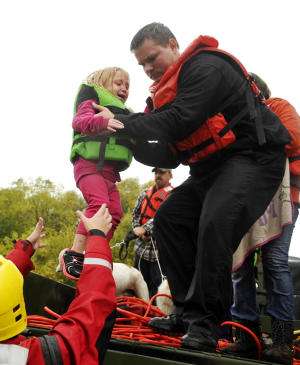 Chris Dunn scored a first place in Keystone Press Awards competition with this photograph of rescue during York County flooding in 2013. She was one of a host of York Daily Record Sunday News staffers who earned awards in recent competitions.

The York Daily Record/Sunday News won a host of awards in statewide competition, including the prestigious John V.R. Bull Award for freedom of information work.

This is the third straight year that the YDR staff won the award in competition against all circulation sizes. We’ve won this award 7 times since 2002.

We also won a total of 15 awards in the Keystone Press Awards competition and 11 in the annual Pennsylvania Association Press Managing Editors contest:

You can see all the individual Keystone Press Awards winners here across all circulation classes: http://panewsmedia.org/Events/contest/awardkeystonepress/keystoneprofessional.