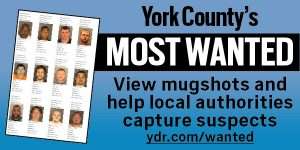 There was back and forth for years about doing a York County most wanted list here at the paper. The logistics kept catching us off guard.

If we got photos and information from the York County Sheriff’s Office, how would we post it? How would we keep it up to date so that if people have been apprehended it’s not incorrect on our site.

In the end, I started working with Cpl. Chad Cassel and the YDR Most Wanted started in January 2013. In total, the list has helped the Sheriff’s Office apprehend 148 people, according to the latest report from Cassel.

It’s not an easy process for us or the Sheriff’s Office.

Since we started working together, the department has arrested more than 1,000 defendants and served more than 1,800 warrants. Hundreds of those wanted have appeared on the Daily Record/Sunday News Most Wanted page and on its Pinterest account.

Many of the warrants are for those who fail to appear in front of a judge, so the judge orders a bench warrant, Cassel said.

Most of the tips they get from from Crime Stoppers, 717-775-TIPS. Cassel said it’s easiest to disseminate the tips to the right jurisdiction that way. But at the end of the day, they end up knocking on a lot of doors.

On our end, we don’t have to knock on doors and chase down suspects (thank goodness). But Cassel sends wanted posters to me in groups on a regular basis. From there, I cut out the photos (or mugshots) of the defendants, and enter their information and pictures into a database we created. Depending on the number sent each time, it could take more than an hour. Currently, the list has 99 people on it.

But it doesn’t end there. Cassel and I have to stay on top of who’s been apprehended so we can update that information on Pinterest and in the database.