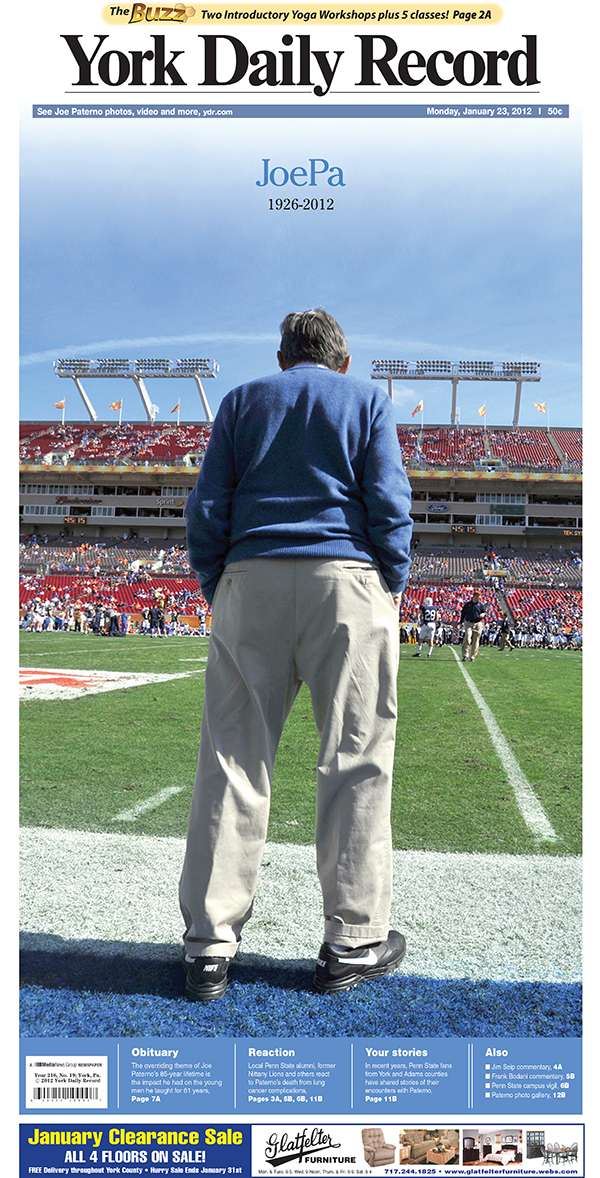 York, Pa., Daily Record/Sunday News graphic artist Samantha Dellinger won a DFMie for her design of this memorable front page, published upon the death of Penn State icon Joe Paterno. The NewsVroom also was a key part of an entry that won a DFMie for community engagement.  One of the highlights of the DFMies was Preserving York’s earning a ‘finalist’ the community blogger category.

First you have the Emmys, and now the DFMies.

Digital First Media or DFM – now you know where the award’s name comes from – is America’s second-largest newspaper company as measured by circulation. It has some excellent journalists in its 70-plus daily newsrooms. Some have won Pulitzer Prizes, an accomplishment that has become a trend at DFM flagship Denver Post.

So the competition is stiff.

When we received word that we earned two first place DFMies and were judged as finalist in three other categories, it felt good. And in a bit of a well-earned asterisk, one of our journalists, Brandie Kessler, scored as a finalist in two categories for her work at her last newsroom, the Pottstown Mercury.

Our NewsVroom mobile media lab – an initiative brought forth by the YDR and the York Newspaper Co. – took one of the firsts in the community engagement category.

And graphic artist Samantha Dellinger scored a first in print design for crafting a Joe Paterno front page in the YDR.

As for finalists, our Candidates’ Night to Listen – spearheaded by Managing Editor Randy Parker – earned a slot in the Live coverage area. Jason Plotkin and Bill Landauer were finalists in the interactive category for their Red Lion shooting retrospective piece: Finding their way out.

This recognition of a community member is one of the best parts of this contest. Blake’s preservingyork.com appears on our York Blog site, and it remains very much an independent grass-roots effort that has gained a wide following.

“We value our relationships with community bloggers,” DFM contest organizer Steve Buttry wrote in an email to the blogger, “and are pleased to recognize you as one of the best.”

Indeed, we are proud to present these winning journalists to the York community as among the best in America.

Here’s the header from the NewsVroom’s blog, which chronicles the visits of the mobile digital education lab to the far reaches of York County and beyond.