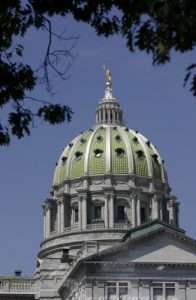 The dome of the Pennsylvania State Capitol Building is seen in this AP photo featured on Pennsylvania’s AP site.

The Pennsylvania Associated Press Managing Editors awards came out Tuesday night, right when our newsroom and 85 other daily newspaper newsrooms across Pennsylvania were in the thick of the election night fight.

You see, when awards come out, everything stops in a newsroom, as journalists scan the list and, well, cheer and opine about the results.

But our journalists must have been intent on their work. Usually, word about award winners leak out in a thousand ways.

No one said anything until one editor blurted out that results were in – right on deadline.

OK, we made deadline anyway.

We also made a great showing, winning 11 awards in our category. We consider it a great year when we break into double digits in this contest – which joins Pennsylvania Society of Newspaper Editors’ Keystone Press Awards competition as a rite of spring.

PAPME’s contest is a little different than the Keystones in a good way. First place winners get a cash award, gleaned from entry fees.

The results in our circulation division:

Column
First: Chris Kelly, The (Scranton) Times-Tribune, “Without a paddle?”
Second: Kate Fratti, Bucks County Courier Times, “If only the church would cry”