Posted by YDR InsiderJanuary 24, 2012 Behind the scenes, Community engagement, Smart

When I’m out and about, it warms my heart to see a newspaper clipping in a frame or laminated and displayed for everyone to see.

During the past few months, I’ve snapped some shots of YDR love around York County. 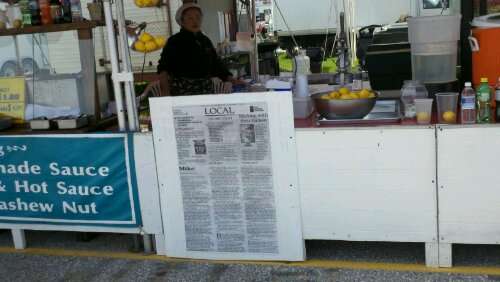 I snapped this picture at the York Fair in September 2011. The blown-up mug shot of Mike Argento grabbed my attention while I waited for my chicken on a stick.

I came across two more clippings while I was on a break from working the Smart magazine booth at The Women’s Show in October 2011 at the York Expo Center. (This year’s Women’s Show is planned for Oct. 6 and 7 at Memorial Hall, in case you want to mark your calendar.)

Last week, I came across this poster-sized collection of newspaper clippings at New Visions Books and Gifts in Springettsbury Township. I was there gathering information and crystals for a layout in the March/April issue of Smart.

Co-owner Bill Trivett spent some time with me, explaining that the store has been in business for 25 years. During that time, they’ve moved at least four times. The shop’s new home in the Kingston Square Shopping Center on Eastern Boulevard is the largest shop they’ve ever had. And business is good, Trivett said.

“It’s been magical being here,” he said.