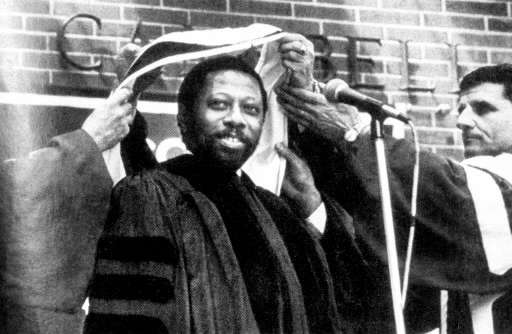 Journalist Robert Maynard receives an honorary degree from York College of Pennsylvania. Maynard started his career at The (York, Pa.) Gazette and Daily and went on to journalistic renown at the Washington Post and Oakland Tribune.

Maynard heads the Robert C. Maynard Institute for Journalism Education, provider of diversity training and instruction about how to help journalists cover their communities.

Dori Maynard spent part of her childhood in York and came back to the city about 10 years ago to present at a brown-bagger in the YDR newsroom, successor to The Gazette and Daily. That newspaper hired Dori’s father, Bob, when no other daily newspaper would in the early 1960s.

Dori was at Digital First Media’s Thunderdome headquarters in New York, and Sam Dellinger was one of her students.

Sam came back excited about her training and wrote about it on her blog, Artist’s Bloc.

For more about Robert Maynard, one of the most renowned journalists to work in or emerge from York County, check out: Journalist Robert Maynard tops among York Daily Record’s alumni