The pros at the York Daily Record/York Newspaper Co. in West Manchester do more than report the news.

They appear in the news, too. You’ve seen the example of Cindi Greco, above.

Here was the lead-in from WITF’s webpage:

“Tom Wolf made several substantial campaign promises when he was running for governor last year.

“On January 20, the York County Democrat will be sworn in and will begin the work to implement those promises. 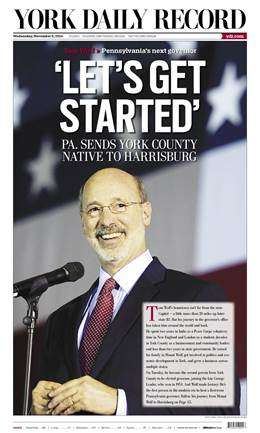 The YDR’s Chris Beck designed this special front page for the historic election edition that recounted Tom Wolf’s win in Pennsylvania’s gubernatorial race. It will be used as the main prop in an 8-foot by 4-foot light box for the Jan. 20 inauguration.