One woman’s use of Facebook spurs a York fix 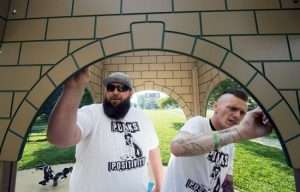 Journalists are supposed to be a community’s eyes and ears. But let’s face it, we can’t be everywhere at all times.

Thanks to one woman’s post to the Facebook group Fixing York PA, I was able to notify Tom Landis, superintendent of York’s Recreation and Parks Bureau, about lewd graffiti at Lincoln Park that was ultimately removed by the city and Punks for Positivity, a local nonprofit.

The “punks,” Dustin Hildebrand and Steve Klinedinst, saw the July 9 post made by city resident Anna McMonigle and reached out to her, offering their services. McMonigle knew of the graffiti because her 7-year-old daughter had read the obscenities that included “Free sex behind tree,” scrawled onto a rock.

Within three days, the lewd messages and other vandalism were removed by a city crew that had worked extra on a Saturday and the punks, who stopped by the park Sunday with a magic eraser, bleach spray, a bandana and some spray paint to get some the city had missed.

“City works overtime to clean graffiti,” “Two guys volunteer to clean graffiti” and “Woman’s Facebook post spurs it all” are some great headlines. Who says we only report on negative news? C’mon now! 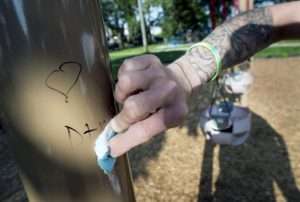 It’s undoubtedly a feel-good story. And while some people bemoan social media and technological advancements they feel are hindering people’s socialization skills, this is an example of how simple use of Facebook sparked a small but positive change.

I wanted to share its process on here so people can know more about Fixing York PA, which was launched and is maintained by the York Daily Record editorial staff. Furthermore, I wanted people to know that the group has generated solid discussions about the city’s goings on. And thanks to Anna, it’s been used to make change.

We wanted it to be a “for you, by us” group that allows you to share how you think the City of York can become a better place to live, work and play. We know you have ideas. We want to hear about them.

So please, join the group, which has grown to more than 1,250 members in just five months, and get in on the conversations. You don’t have to be a city resident. We only ask you keep the debate civil.

Here are some more stories on York parks: