United Way campaign at 1891 Loucks: ‘That’s a wonderful contribution to our community’ 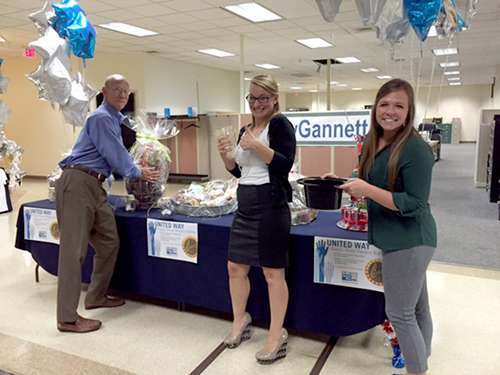 President/Publisher Sara Glines’ thank you note to 1891 Loucks Road staff members for their involvement in a successful 2015 United Way campaign:

“Our United Way campaign has ended and raised $10,258 for local programs.

“That’s a wonderful contribution to our community.”

“The bulk of that came from your personal contributions pledged through payroll deductions. We again had staffers sign up to give the equivalent of an hour of pay per month. They get a day off as our thank you. The parking space winners have also been awarded their premium parking spots for a month.

“Our Spirit Week, Basket Raffle and Penny Wars raised a total of $1,069. Penny Wars were more than half of that and certainly the most competitive.

“Thank you to the United Way Campaign Committee who made this all happen:
– Tiffany Carter
– Shelley Bodani
– Kelly Barnett
– Megan Groft
– Sarah Wagaman

“A special thank you to Shelley Bodani and Mike Wynegar for being the face and voice of our events. We put together some great videos to rally our team and had some fun with the auction and winner announcements of both the raffle and Penny Wars.

“They put the FUN in this year’s campaign.

“On behalf of United Way and your community members in need, sincere thanks to everyone who donated to this campaign.”

The Penny War. Sara Glines’ called it competitive. Yes, it was.