Posted by YDR InsiderNovember 5, 2014 Behind the scenes, Editor, News coverage 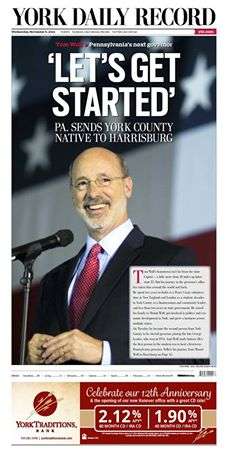 This front page photo shows Tom Wolf delivering his Nov. 4 victory speech as Pennsylvania governor-elect. Fortunately, he provided a phrase that became the YDR headline on this keepsake edition.

Well, YDR staff members got started on the headline for the keepsake edition days ago.

But it wasn’t until the 11th hour, literally, that the pick went to that phrase, plucked from Tom Wolf’s victory speech at the Utz Arena in his home county.

Why did it come to that? 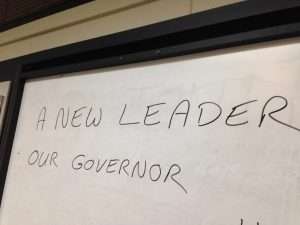 Early on election night, Managing Editor Randy Parker and presentation editor Brad Jennings led a brainstorming session with a flip chart and white board designed to collect from the minds of a group of staffers a headline that reflected that a York countian won the governor’s seat.

We sought something that could draw on York County culture, history or sense of place. We also looked for a play on the Wolf surname, which should be a favorite for headline writers for the next four years.

We had to do that in two words because of the pre-designed  front page. (We also had a backup front page in case Corbett won and worked on some headlines in case he came from behind to gain a second term.)

“Gov. Wolf,” for example, would have been OK anywhere in Pa.

We were intrigued by “A new leader,” but set it aside because, among other things, we were concerned people wouldn’t get its connection to George Leader, Pennsylvania’s first governor from York County.

Some liked “Our Governor,” with its double meaning but couldn’t make that work with the fact that York County’s electorate chose incumbent Tom Corbett over their home county’s candidate, 57 percent to 43 percent.

So our best bet was to cull something from Wolf’s victory speech. After much more deliberation, we went with “Let’s Get Started.”

We felt it was fine, but somehow also felt that we missed an opportunity.

Oh well, the Wolf name offers much opportunity, such as when the governor-elect, whose former company makes kitchen cabinets, starts naming his department heads.

If you had been tasked to write a 2-3 word headline (10-15 characters) for the YDR’s front page on election night, what would have been your choice?

Elsewhere in the room used for brainstorming the headline, a journalist’s favorite food … .