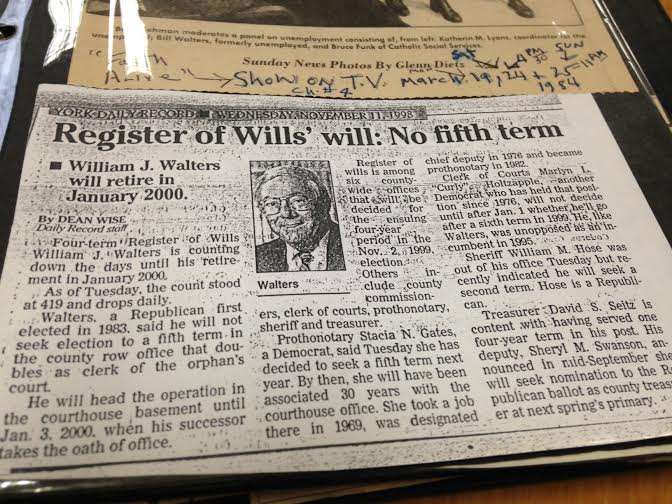 Well-known York countian Bill Walters brought three scrapbooks into 1891 Loucks Road to share interesting moments in his career. They were just packed with newspaper clippings detailing the years of private and public sector work since he arrived in York County in 1964. William J. Walters is the grandfather of The Evening Sun’s hard-working Mark Walters, who will soon join the York, Pa., Daily Record’s reporting staff. For more photos about those fact-filled clippings, check out: Walters’ scrapbook.

There’s an old saying that news doesn’t happen in a newsroom.

That’s true, but occasionally ideas for stories just find you in a newsroom.

That was the case involving three relatives of staff at the York Daily Record and York Newspaper Co. at 1891 Loucks Road.

Here are  two more photos and stories, to join the tale of Bill Walters above, that I did after hearing about family members of co-workers who have interesting stories to tell. 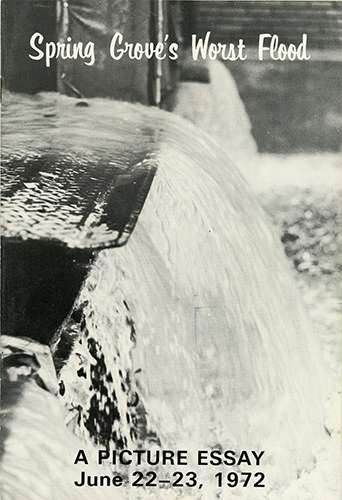 Prominent architect Walt Geiger designed Glatfelter Memorial Library in his hometown of Spring Grove in the early 1990s, as well as many well-known buildings across America. He’s the father of the YDR’s very creative web producer Abigail Geiger. Abigail mentioned that young Walt Geiger produced a picture booklet, above, of Tropical Storm Agnes’ impact on Spring Grove in 1972. That caught my attention, and here’s the result: Remembering Agnes: ‘Spring Grove’s Worst Flood.’
+++ 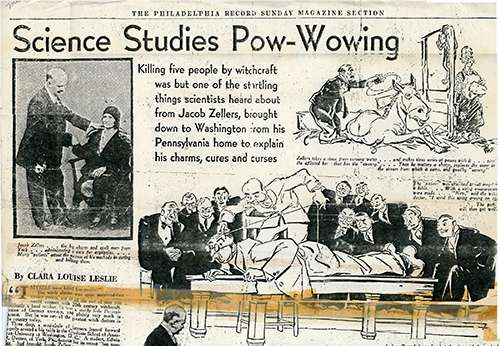 Transportation’s Terry Zellers handed me a full-page photo copy of a Philadelphia Record story from the early 1930s about his grandfather, Jacob Zellers.  The Philadelphia Record tells about the York countian, who said he practiced powwowing – a good influence, as he described it. Powwowing opposed witchcraft and hexing, Jacob Zellers told an American University class. For more: Science studies powwowing.