The York Daily Record is not a newspaper

Randy kept yelling at the kids.

It happened at least five times while we were visiting with the students at Dallastown Middle School today. But each time it started with a simple question. One he knew they would get wrong.

“What is the York Daily Record?”

You see Randy Parker, the Managing Editor and I were participating in a career day at the school and joined ten other people in taking two minutes to talk about our jobs. Then after everyone got their turn, we went off to our tables and waited for the kids to come up to us and ask questions.

You would think with the amount of times Randy yelled at the kids, they wouldn’t come near us. But you would be wrong.

To put it another way, this wasn’t Randy’s first rodeo.

He had done this career day for years, and had established himself as a favorite.

But this year was a little different. This year, Randy brought toys and I was along for the ride to watch the reactions.

So when any of the kids would respond to Randy’s first question, it was usually, “The York Daily Record is a newspaper.”

It got to the point where some of the other panelist, like Dave Hendry, also know as “Hollywood” on Wink 104 and Todd Eckhart, a music producer with Riverflow Productions, would just turn to me and say, “Randy’s up. Here come’s the show.”

He would always start with the question.

Always knowing they would get it wrong.

Then came the education.

Then came the toys. Randy walked up to the steps to the stage in the auditorium and pulled out six Ipads and five smart phones. He then asked the kids to become reporters, covering the speaker with these devices and take pictures and video. When he asked for volunteers, suddenly the room came alive.

Once all the speakers were done, the kids came up to the tent we had set up in the back. 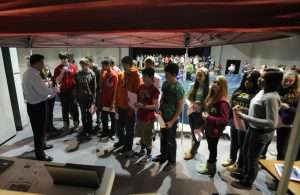 They would share what they did with Randy, and we would explain to them that these tools, along with the using social media sites like Facebook, Twitter and Instagram, had become a regular part of our workflow as journalists. Things were changing in the news industry. Exciting things. And the staff at the York Daily Record was changing with it.

We were no longer a newspaper.

And I think the students at Dallastown Middle School got the message.