‘The Redoubt’ no doubt will aid Gettysburg 150 coverage

The Redoubt is the name coined for the satellite newsroom at Gettysburg Seminary on, yes, Seminary Ridge that four Digital First Media newsrooms will use to cover Gettysburg150. The York Daily Record/Sunday News, Hanover Evening Sun, Chambersburg Public Opinion and Lebanon Daily News will combine staffs in covering the 150th anniversary event in and around Gettysburg. Evening Sun Editor Marc Charisse, who named ‘The Redoubt,’ said that at the end of the first day of fighting at the Battle of Gettysburg, the remnants of the Iron Brigade constructed a breastworks so named near the satellite newsroom’s seminary site.

No doubt that The Redoubt will aid the York Daily Record and three other Digital First newsrooms cover Gettysburg 150.

The satellite newsroom on the Gettysburg Seminary campus will be an organizing force in what could be a confusing event to cover.

So the role of The Redoubt is explained in a note I sent  to York Daily Record staff members this morning.

It tells a bit about how a multi-newsroom organization prepares to cover a major event.

An updated and edited version of the note follows: 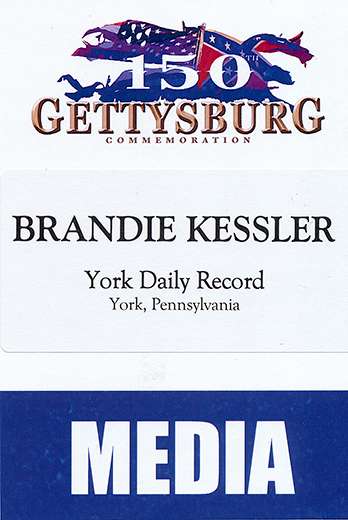 To the YDR staff:

Most of you are involved in the Gettysburg 150 project in some way. As we face a challenging two-week stretch, I just wanted to share some thoughts about this project:

– This project will be transformational for our newsroom and you as individuals. We have modeled our structure in part from lessons learned in covering tragedies in Newtown and Boston. This reflects the geographic scope of this project and the size of the event. So, we’ll have a structure that allows you and the two- or three-score journalists from four newsrooms to cover a story that is largely 30 miles away. (The Lebanon Daily News is part of the project, too.) That structure also recognizes that Thunderdome, DFM’s national digital newsroom, will send in journalists to overlay and support our efforts. It also recognizes that we have important stories close to home to cover as well, e.g., re-enactments of the battles of Wrightsville and Hanover. In short, we modeled this coverage – with a satellite newsroom and new workflows – with the idea that this structure could cover a story of similar scale, be it a major planned event, or an unexpected tragedy.

– You’ll get the experience – or gain more experience – in Gettysburg of covering a huge story, e.g., difficulties in getting around, uncomfortable weather, time spent waiting and waiting, communications problems. We’re doing our best to clear up the normal confusion of organizing this many people working on such a sprawling story. But we’re counting on your initiative and savvy and experience – and patience – to get the stories.

– On the topic of story, we must look for great stories to tell. This is a chance to do above-and-beyond work, to make the most of a story. We’re also interested in the practical go-and-do parts of the story, helping the reader also navigate Gettysburg. Use this time to find and write great stories with as many local hooks as possible. A hypothetical example I used the other day is to find George Pickett’s great-great grandson overcome with emotion as he retraces his kinsmen’s steps on Cemetery Ridge. At the same time, look for the breaking news. When you get crowds of this size, news will happen. In the past, we’ve had lightning strikes, the use of live ammo during a re-enactment, people coping with extreme heat.

– We are digital first, and we are blessed to have an array of digital tools available and the latest technology to send from the field. Pick the tool appropriate for the story and try some that you might not be familiar with. Know that we’re introducing curation and social media desks to overlay the work of at least three new newsrooms in this project, so you have digital backup.

– If you run across our partners from Thunderdome, engage them. Learn from them – some of them have considerable field experience covering big stories – and they’ll no doubt learn from us. They’re here at our request to supplement our efforts, and they have the tools and resources to multiply the audience for our good work across 75 daily DFM newsrooms and beyond.

– Take care of yourself. Make sure you have rain gear. One of the toughest opponents in doing such a story is fatigue. It may test your stamina. But remember to have fun.

– Thanks to the many leaders in planning this project. The generals have been Scott Blanchard, Eileen Joyce, Marc Charisse and Becky Bennett. Scott and Eileen will be the primary staff in the Seminary Ridge satellite newsroom – The Redoubt, as it’s been tagged.

– Managing Editor Randy Parker was right in saying the other day that we’ll come out the other side of this project as a changed newsroom. Gettysburg 150 will give us all a chance to grow as individual journalists, as journalistic teams and with our partners in Chambersburg, Hanover and Lebanon. When that happens, multiplied across this newsroom and three others, we’ll be able to offer our readers and communities an even higher level of journalism. Thanks to everyone who is participating in this project.

From a news planning point of view, the Gettysburg 150 project was complex.This graphic is being used in news planning to help explain roles among the York, Hanover and Chambersburg newsrooms. (Click on the graphic to enlarge.)