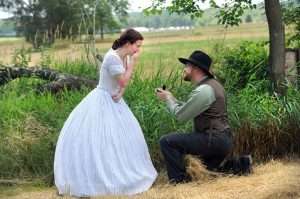 York,Pa., Daily Record/Sunday News photographer Jason Plotkin’s Gettysburg 150 photograph received more than 500 YDR Facebook likes. Here was the FB question: “Re-enactor Patrick McCarthy gets down on one knee as he asks his girlfriend Anna Jennings to marry him at the Gettysburg 150th celebration today. Wanna guess what she said?” This photo, with its accompanying story – At Gettysburg, a re-enactor’s big question – was part of the work produced by more than 40 Digital First Media journalists covering the Battle of Gettysburg’s 150th anniversary on site. Also of interest: ‘The Redoubt’ no doubt will aid Gettysburg 150 coverage .

Everything about Gettysburg is special. It’s hallowed ground, after all.

I was thinking about that when strolling around the Redoubt, the then-empty satellite newsroom that was accommodating a rotation of more than 40 journalists representing five news organizations covering Gettysburg 150.

This graphic, developed shortly after the first of the year, outlined roles for the Gettysburg 150 project. (Click on the graphic to enlarge.)

On that Saturday night – the first Saturday bracketing the battle anniversary – I was trying to make sense of the Gettysburg story and how we were going to cover it. I thought about how extraordinarily well our journalists from York, Hanover, Chambersburg and Lebanon (plus journos from our New York newsroom) were going after stories.

What I did know was that this was a special story and that we were not going to glorify war and unduly focus on the pageantry that you see when people forget the real story behind a big anniversary.

A lapse in tone and amnesia about the vicissitudes and viciousness of war would result in criticism, sentiments such as those later shared by York countian Pat Long on my Facebook page:

“Seems to me that all the energy, effort, time and money put into this celebration of killing and suffering would have been better used in contemplating alternatives to war and helping the homeless and needy veterans of present wars we have among us here in York and Adams County.”

We were going to guard against trivializing a key anniversary of this revered, landmark moment in American history.

I thought of the rich menu of stories our journalists already had produced, memorable photos, for example, from the first of two Gettysburg 150 re-enactments.

This was special coverage of a special event at a special place. Hallowed ground, it was.

So went the week, as our Redoubt journalists – backed up by perhaps 20 journalists in our respective newsrooms – peeled off story after story, photo after photo and video after video.

We Tweeted. We Touted. We aggregated stories using the likes of Spundge and Rebel Mouse. We deployed about 20 social media tools to push out our coverage.

Our Digital First Media partners from the New York newsroom with the strangely appealing name – Thunderdome – syndicated our content to 75 sister newsrooms.

Meanwhile, The Associated Press was cherry-picking our stories for its members worldwide, and our stories were streaming out on AP’s news app.

Of course, this story was not about us.

It was about those who fought in the fields surrounding the Redoubt’s Seminary Ridge site. It was about the beginning of the end of a conflict that split the Union and strained the Constitution. It was about a war fought to smite a blow to slavery and the racism inherent in that peculiar institution.

But I kept thinking about what this story meant to our journalists – and to journalism.

I knew that this mashup of Digital First Media newsrooms – modeled after lessons in covering terrible stories at Sandy Hook and the Boston Marathon – was becoming a standard form for coverage in American journalism.

Small- and medium-size news organizations can combine resources, move to the site of a story and transmit their stories and photos around the world from the field. In this manner, we can compete with big media on major stories.

So if a story such as Nickel Mines erupts – heaven forbid – we can quickly mobilize, join forces with sister newsrooms in eastern Pennsylvania and provide our digital and print readers with rich content within hours.

Viewers take in this information, however troubling the event, in great numbers, whether the news event breaks in York County or eastern Lancaster County. For example, readers on just one website, ydr.com, have viewed roughly 100,000 Gettysburg 150 images in July.

Reports of the demise of newspapers and other media are simply off-target. Combining print and digital delivery, this post will be read by far more people than ever would have seen it in the newspaper, even when print was at its peak.

So just when some folks have written off the news media, we gathered 60 journalists in and around Gettysburg to comprehensively cover an anniversary story that captured America’s attention.

Newtown, Boston and Gettysburg taught us many lessons about how to immediately mobilize, move and assign large numbers of journalists, equipped with the most up-to-date technology, to cover even the toughest of stories.

But it took the YDR’s Scott Blanchard, one of the lead editors on this project, to put into words some of the ideas I had been mulling.

The Gettysburg story, he said, provided a moment for journalists from different news organizations, newsroom cultures and coverage experiences to meet up – to come together on a story with meaning.

Our journalists wanted their stories and photos to be special. The moment – the event and what it represented – demanded no less.

Scott recounted a conversation with Hanover Evening Sun Editor Marc Charisse, another project leader, whom we tagged Gen. Charisse. The general said this about his own work, and the overall effort: “I wanted it to be good.”

And that it was.

So it came with a tinge of sadness – but with a strong sense of our journalists’ achievements – when I read Scott Blanchard’s email late on the second Sunday: “At battle’s end, the Redoubt is signing out.”

With all the tools and technology available to journalists in Gettysburg, the camera remained the most useful. Here, Lebanon’s Jeremy Long captured this re-enactment scene.

Also:
– Note of appreciation: Thanks to Lutheran Theological Seminary in Gettysburg for making a third-floor classroom in Valentine Hall available in what became the Redoubt. That vantage point let us observe the well-received new Seminary Ridge Museum next door in Schmucker Hall.

– We’re continuing to collect staff comments on this project. Here’s one, about The Redoubt: “I feel like the Redoubt also built a sense of being part of a team – if you need to troubleshoot something, get a second opinion, or even just escape into the AC for a few minutes–that there’s someone there.”

– The special work of these journalists will be preserved in various existing and soon-to-be published digital platforms: websites, apps, e-books, Kindle singles and, of course, on newsprint.

When you exit a news event of this scope, you spend considerable time looking at what worked and what didn’t work. Though the review process is not complete, here is a sampling of five of each (pardon the journalese):

1. Increased synergy and bonding among journalists across our four-newsroom cluster as well as a firmer handshake with Thunderdome. This was the closest the four newsrooms have worked on a project.
2. A different model from Newtown and Boston was deployed. This was a different story, a major planned event. In Gettysburg, Thunderdome provided story and photo editing support. Thunderdome was also helpful in identifying stories that would play nationally. Social media and curation desks were used at the local level to overlay the work in individual newsrooms for the first time in one of these big events.
3. The need for on-site photo/video editing and management was reinforced with visual editors at the Redoubt for the entire project.
4. Conversion to a common platform across the newsrooms using Google docs proved successful.
5. Lines of authority and decision-making across four newsrooms and Thunderdome appeared to be clear. They were tested, too, by a breaking news story involving a police chase.

B. What needed work:

1. The roster of journalists needs to include area codes with phone numbers. Setting up a Twitter list of all of the reporters/photographers/editors involved in the coverage ahead of time is going to be a huge help if/when breaking news happens to facilitate retweeting.

2. In the breaking news event – the police incident – the presence of a satellite newsroom must be factored in to communications workflows. A discussion point here.

3. On the communication side, the all-points gettysburg@ydr.com address seemed like it served as a catch-all and thus was overused. Perhaps a Mission-Control-esque email address/filter person would have handled a lot of the emails that wound up essentially spamming everyone.

4. Newsrooms were getting stories for print that were over budget and didn’t know if there were breakouts etc.

5. It would have been useful to have a daily general assignment reporter. We used the cops reporter as a GA for unbudgeted stories in some cases or for quick response.

Put a bunch of journalists in a room for 12 days and you’ll get a fair share of memorable quotes, all of which made the white board at Valentine Hall some of which appear here as “Top 10 Redoubt quotes”:

– An observant female journalist on why sideburns are manly.

2. “You call it The Redoubt – We call it the No Doubt!”
– An ebullient journalist.

– A resourceful journalist, on how she got back to the Redoubt.

5. “Thank goodness,”
– One uninhibited journalist about another’s reluctance to inflict himself on people via social media.

6. “There are worse thoughts in my head than throwing up.”
– Same ebullient journalist about his coverage via an airplane.

7. “That was so much further than anyone said it would be.”
– City-living journalist after grueling hike to get coffee.

8. “What am I, a rookie?”
– Another city-living journalist, discussing his ability to assess the quality of candy stores.

9. “I have just enough information to give you information so you have information.”
– Tight-lipped South Central TaskForce PIO.

Individual newsrooms covered Civil War events in their traditional coverage areas, too, and placed them into pooled coverage. Here is Chambersburg Public Opinion Ryan Blackwell’s video about the Battle of Monterey Pass.