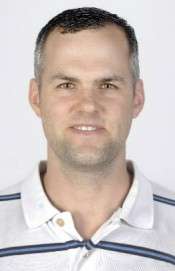 To help you get to know our newsroom staff a bit better, a series of question-and-answer posts with each journalist will run on Mondays. This morning, meet assistant managing editor of visuals and multimedia Brad Jennings. He oversees the visual department (graphics, photos, video and so on), including big multimedia projects like the look back at Red Lion’s 2003 school shooting.

Name: Brad Jennings
Lives in: Springettsbury Township
Hometown: Newark, Delaware
Position at the YDR: Assistant Managing Editor — Visuals and Multimedia
Years with the YDR: 12
Graduated from: Our Lady of Grace Kindergarten Class of 1981
Seriously graduated from: University of Delaware
With a degree in: English – Journalism
Twitter: @bradjennings9
Email: bjennings@ydr.com
Whatever you’d like to tell us about yourself: I came to the Daily Record as a news copy editor in 2000. I then became a sports copy editor and was promoted to assistant sports editor in 2004. I moved to visual editor in 2007 before taking his current position as AME, which oversees the visual department, in 2010. Before coming to York, I worked as a sports market research analyst for ESPN. I grew up in Delaware and passionately defend the great First State. In college, I was known to perform at parties as a rapper by the name of “Brat X.” I have an extensive collection of 1967 U.S. quarters for no reason at all. I hate spiders. For 18 years I raced go-karts on Maryland asphalt tracks, finally giving up on my NASCAR dreams in 2006. I always choose the wrong checkout line at the grocery store. I frequently wore colorful “MC Hammer” genie pants in high school and am hopeful they will come back in style. I am a diehard Phillies and Eagles fan. I love pizza. At the end of the day, I drive a lime green VW Beetle home to see my wife, daughters, dog and one-too-many cats.

1. What made you want to become a journalist? I grew up reading newspapers every day, and I loved writing and creative storytelling. My college major was secondary education, but I could never actually see myself teaching high school. With three semesters to go before graduation, I switched majors to journalism, and I still count that as one of the best decisions of my life.

2. How do you see journalism changing? It changes every day. Tools that were brand new last year are already obsolete. It used to be we followed written rules to know how we were supposed to do our jobs. Now, things change too quickly for written rules. We have to stick to our core principles and let them guide us in all of our decisions.

3. What do you like most about your job? The least? Most: Getting a front-row seat to watch history made every day. And getting to work with some of the most talented, most creative, and most driven people I’ve ever met. Least: Missing my family because of the long hours.

5. What’s been your favorite project or story recently? Why? York County’s steam locomotive project: We told the story of the construction of a Civil War-era steam locomotive that is expected to run on York County tracks starting in 2013. Our photographer went to Illinois to see it being built. We told this story with photos and graphics and video and a lot of interactivity online. It’s a great example of multimedia storytelling that we need to be doing more often.

6. The drink that’s on your desk right now is: Diet Mountain Dew

7. Your favorite journalism-related blog you read or Twitter feed you follow: Following our sports editor @YDRChrisOtto will keep you current on the entire world — from European politics, to Alaskan weather patterns, to York County high school tennis results. What else could you ask for?

8. What’s the last movie you saw in theaters? The last book you read? MOVIE: Moneyball, on an anniversary date. BOOK: Llama Llama Red Pajama, one of my daughter’s favorites

9. What’s your favorite place in York County? Blue Hound Farm near Lewisberry, where I lived for several years among the horses, pigs, chickens, turkeys and goats:  http://www.bluehoundfarm.com

10. What’s one piece of newsroom jargon that had to be explained to you? Slot: This more recently referred to the person who led or handled the front-page design of the news or sports sections of the newspaper each night. I spent many years as a sports slot editor. Its origin: Back in the old days of pencil and paper, there were horseshoe-shaped desks. The lead editor — known as the “slot” editor — sat inside the horseshoe so he could easily reach and communicate with all the reporters or editors who sat on the outside of the horseshoe, known as the “rim.”

Last week, we ran a Q&A with religion reporter John Hilton. To read all of the staff Q&A interviews we’ve done so far, click on the “Staff Q&As” under “About us” at the top of the homepage.