Posted by YDR InsiderApril 16, 2012 Behind the scenes, Editor, Staff Q&As 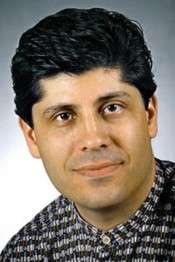 To help you get to know our newsroom staff a bit better, a series of question-and-answer posts with each journalist will run on Mondays. This morning, meet Sunday editor Scott Blanchard. You might have seen his posts on Record Tracker or Tell Me A Story, but he’s also in charge of the enterprise packages you often read in the Sunday News.

Name: Scott Blanchard
Lives in: Littlestown
Hometown: Rockville, Md.
Position at the YDR: Sunday editor
Years with the YDR: 11
Graduated from: University of Missouri
With a degree in: Journalism
Twitter : @scott_blanchard
Facebook: Subscribe to public posts at facebook.com/scottblanchard8
Google+: www.gplus.to/scottblanchard
Whatever you’d like to tell us about yourself:  I arrived at the York Daily Record as the day metro editor in May 2001 and became the Sunday editor in 2004.  My main duties are to lead enterprise/project reporting with an emphasis on public records; plan and edit staff contributions to Sunday’s paper; and coordinate newsroom training.  In 2007, I created the newspaper’s “Year of Storytelling,” a focus on narrative craft that included a series of seminars and an ongoing writing blog called Tell Me a Story.  I also blog on open records.  I led a team that revised our ethics guidelines in 2004, and a team that created our online ethics guidelines in 2010.

I recently became a member of the Pennsylvania Society of Newspaper Editors’ board of directors. I started my career as a sports reporter at the Harrisonburg (Va.) Daily News-Record in 1986, then moved to The Roanoke (Va.) Times, where I covered Virginia Tech athletics from 1989-1994. I was sports editor (1994-97) and then city editor (1997-2001) at the Carroll County (Md.) Times before coming to the YDR.

1. What made you want to become a journalist? I love the idea of being the eyes & ears for people who can’t be directly involved in everything they’re interested in knowing about.

2. How do you see journalism changing? Journalism isn’t changing as much as the tools we use to do journalism are changing. I think doing the job well always requires independence, ethics & a thoughtful approach to issues and stories.

3. What do you like most about your job? The least? Most: Helping a staffer tell a story that excites him or her, because those are the ones that resonate with readers. Least: Too many stories to tell and not enough people or time to tell them.

4. It’s 9:30 a.m. on a day off. What are you doing? Could be in the gym, on a trail somewhere or going through my Feedly and social networks to catch up on news, stories and such.

5. What’s been your favorite project or story recently? Why? Frank Bodani’s piece on Barbara Gregory, the Newberry Township woman who was once a prominent exotic animal rehabilitator but had to send away her animals as she aged. Barbara wrote a terse news release intending to tell people she could no longer accept many types of injured wildlife. Our day metro editor, Amy Gulli, thought there might be a story in it and gave it to me. I thought it was something Frank, a fantastic storyteller, would be interested in. He was, and he discovered, reported and wrote a poignant story about Barbara’s life, then and now.

6. The drink that’s on your desk right now is: Coffee.

10. What’s one piece of newsroom jargon that had to be explained to you? N/A

Last week, we ran a Q&A with multiplatform journalist Ashley May. To read all of the staff Q&A interviews we’ve done so far, click on the “Staff Q&As” under “About us” at the top of the homepage.