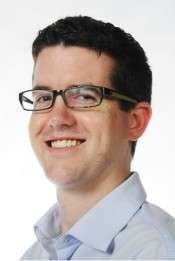 To help you get to know our newsroom staff a bit better, a series of question-and-answer posts with each journalist will run on Mondays. This morning, meet government and politics reporter Ed Mahon. In addition to his stories in print and online at ydr.com, you might also have read his posts at YDR Politics.

Name: Ed Mahon
Lives in: Springettsbury Township
Hometown: Springfield, Delaware County. To get there from York County, you can take Route 30 east for awhile, then head a little south.
Position at the YDR: Government and politics reporter
Years with the YDR: One
Graduated from: La Salle University in Philadelphia in 2005
With a degree in: English, with a concentration in writing
Twitter: @edmahonreporter (I use it the most). I also have a work Facebook page and a Google+ account.
Whatever you’d like to tell us about yourself: I love journalism, and I think it’s an honor and a responsibility to work in the field.

1. What made you want to become a journalist? I always liked to write and read, but I got hooked on reporting after getting involved with the college paper.

2. How do you see journalism changing? Here’s the definition of journalism that I like best: Journalism is telling the truth about the world. The goal doesn’t change, but how we try to achieve it does. So I think it’s possible to use new tools to make government and politicians more accountable, and to make complex issues more understandable. For instance, I love websites where you can balance the federal government’s budget, or a university’s, on your own; or ones where you can take a quiz to find out which candidate best matches up with your views. I think engaging readers in those way can help the information stick better.

3. What do you like most about your job? Being surprised by something, and then being able to share that with people. The least? One time, I wrote and filed a story while the photographer drove. I felt a little carsick afterward. That wasn’t super fun.

5. What’s been your favorite project or story recently? Why? I traveled to Washington, D.C., twice recently: for a story in November about U.S. Rep. Todd Platts preparing to leave office; and for a story in January about U.S. Rep. Scott Perry being sworn-in. They were very different days and stories. For the November article, Jason Plotkin, Scott Fisher and I were the only journalists shadowing Platts that day. A large part of the article was looking back at the past 12 years. And I had a few days to write the story. The January visit was much more hectic for everyone: children and chocolate milk complications caused Perry to almost miss his own swearing-in; Jason Plotkin wanted to punch a congressman; and I felt a little carsick on the way home (see also, answer to question three). But the coverage turned out well, and it was a fun day.

6. The drink that’s on your desk right now is: I’ve attached a picture. The big orange container has water.

7. Your favorite journalism-related blog you read or Twitter feed you follow: Planet Money — the journalists there have been doing some great public service journalism for years. They take complex issues — some of which may seem abstract — and they find ways to clearly explain them and show the real life impact. Remember when they bought a toxic asset? That was awesome.

8. What’s your favorite movie? “It’s a Wonderful Life.” I’ll also throw in some television: “The Brig,” an episode from the third season of “Lost.” It’s dark. “Once More, with Feeling” from “Buffy the Vampire Slayer” has two of my favorite things: musical numbers and Joss Whedon. It’s also pretty dark. Book? “The Adventures of Huckleberry Finn” by Mark Twain, “Complications” by Atul Gawande, and most comic books by Brian Michael Bendis. Also, “Juggling for the Complete Klutz” was pretty influential to me in high school.

9. What’s your favorite place in York County? The rail trail.

10. What’s one piece of newsroom jargon that had to be explained to you? Is it spelled “lead”? Or “lede”? [Editor’s note: The first paragraphs of a news story.] In my career, I’ve had different editors write both ways to me in emails. I’ve heard both are correct, but I always worried editors were judging me if I didn’t use their version. The 2010 Associated Press stylebook doesn’t seem to offer any answers. But maybe I’m looking in the wrong section.

Last week, we ran a Q&A with editorial assistant Kim Curran. To read all of the staff Q&A interviews we’ve done so far, click on the “Staff Q&As” under “About us” at the top of the homepage.