Posted by YDR InsiderJanuary 30, 2012 Behind the scenes, Staff Q&As 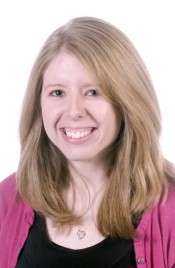 To help you get to know our newsroom staff a bit better, a series of question-and-answer posts with each journalist will run on Mondays. This morning, meet night police reporter Rebecca LeFever. You’ve seen her posts on YDR Insider, including “When covering the news ruins my shoes” last week, and on York City Limits.

Name: Rebecca LeFever
Lives in: York
Hometown: Lancaster, Pa
Position at the YDR: Night police reporter
Years with the YDR: Two
Graduated from: Millersville University
With a degree in: English with a minor in print media
Twitter: @ralefever
Email: rlefever@ydr.com
Google+: Search for Rebecca LeFever
Facebook:  Rebecca LeFever, YDR night cops reporter
Whatever you’d like to tell us about yourself: Rick Lee has boots older than me. I was the baby in the newsroom for a long time, and even though there are now a few folks younger than me, it’s easier to pick on the old people. About a year ago, I moved across the Susquehanna River to my new home in York, where I fill my mornings (technically those don’t start until noon) with cooking, blogging and occasionally exploring the city. My nights are spent chasing the flashing lights that lead to a crime scene, fire or crash. It’s taught me to always pack a snack (I once spent nine hours at a scene) and to wear long underwear every day after Thanksgiving (those nine hours were spent outside).

1. What made you want to become a journalist? I’ve always liked to write but I didn’t get excited about journalism until I started working for my college’s newspaper, The Snapper. The things I learned in that office pushed me to apply for internships, freelance and eventually get to where I am now. I started at YDR as a copy editor but got back into writing nine months later on the police beat.

2. How do you see journalism changing? We’re always pushing to interact with and engage our readers in new ways. When I go to a shooting scene now, it’s not just about talking to neighbors or police, but getting video or photos. I’m learning things on the job I never learned in college because our technology tools are always changing.

3. What do you like most about your job? The least? It’s different every day, which is exciting, but stressful. You have to love being a cops reporter. On any night, I might have to drop whatever I’m doing to go a fire, a shooting or a crash scene. I regularly rush back to the newsroom after spending hours at a scene to type a story up at 11 p.m. and get it in the newspaper for the next day. When it’s done, I’m exhausted, but I feel so accomplished.

5. What’s been your favorite project or story recently? Why? The most recent project I worked on was about York city’s Parkway Gang and a resident who is working to fight crime in that neighborhood. I met law enforcement officers, residents and reformed gang members who were all working to protect the people who lived there. I was able to show readers what it’s like for someone people to live with drug sales and weekend shootings right outside their homes. I felt like I was really able to educate people on events they were unable to see for themselves.

6. The drink that’s on your desk right now is: Stale coffee and water.

7. Your favorite journalism-related blog you read or Twitter feed you follow: Can’t say that I have one, but I’m always on CNN. I love food blogs. Cooking is my main hobby outside of work.

8. What’s the last movie you saw in theaters? The last book you read? My boyfriend’s love of sports meant we had to go see “Moneyball.” As long as it’s got a good story line, I’ll go see whatever. The last book I read was “Tokyo Vice” by Jake Adelstein. My editor lent me the book after we shared our experiences on the crime beat. Adelstein wrote about his job as an American reporting on crime in Japan. It’s fascinating to see how both foreign police departments and newspapers function.

9. What’s your favorite place in York County? I don’t really have one yet. I moved here from Lancaster County a little more than a year ago and I can list at least a dozen favorite places I have there. I guess I’m a little biased. Probably the place I got to the most is Cobblestones in York for Sunday/Monday night football. Who doesn’t like free popcorn?

10. What’s one piece of newsroom jargon that had to be explained to you? Learning to listen to scanner chatter was probably the most difficult thing. Class 4 means there was a death and County 50 means the coroner was called to the scene. Class 1 is the most severe of injuries and Class 3 is the least. It’s incredibly helpful information when we have to decide if a reporter needs to rush out to a scene.

Last week, we ran a Q&A with editor James McClure. To read all of the staff Q&A interviews we’ve done so far, click on the “Staff Q&As” under “About us” at the top of the homepage.