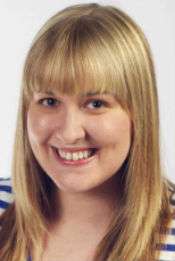 To help you get to know our newsroom staff a bit better, a series of question-and-answer posts with each journalist will run on Mondays. This morning, meet niche publications and Smart magazine editor April Trotter. She’s the woman behind all things Smart — Facebook, Twitter, the website, the weekly e-newsletter, the print magazine and Pinterest. She also blogs on Twenty & Change.

Name: April Trotter
Lives in: New Cumberland (Fairview Township)
Hometown: Falls, Pa., which is in that whole Scranton/Wilkes-Barre area of northeastern Pennsylvania
Position at the YDR: Niche publications editor and editor of Smart
Years with the YDR: I started in my current position in June, and I first came to YDR as a multiplatform journalist in the features department in August 2011.
Graduated from:  Penn State 2007 and Shippensburg University 2012
With a degree in: Journalism and communications studies
Twitter: @apriltrotter, @SmartMagPA
Email: atrotter@ydr.com
Whatever you’d like to tell us about yourself: I play on a kickball team (shout out to Pitch, Please!). My favorite song of all time is “Bennie and the Jets.” I own more cardigans than anyone I know. And I’ve been known to still use my student ID to get mean retail discounts.

1. What made you want to become a journalist? I spent the first half of my college career as a biochemistry major. After interning in a lab the summer before my junior year — where I single-handedly caused global warming by breeding beetles and releasing them into the wild — I had a major change of heart. I was involved in my high school newspaper and helped introduce a Daily Collegian branch to Penn State Wilkes-Barre, so I always had an appreciation for journalism and knack for writing. Thankfully I had some awesome professors at PSU that helped mold the direction I wanted to go in and I quickly found my niche in copy editing/page design.

2. How do you see journalism changing? I think social media and blogging and other new technologies have forced journalism as an institution to be more transparent and interact with readers more, which is definitely a good thing.

3. What do you like most about your job? I love the planning-really-far-in-advance aspect of working with Smart. Thinking about stories and photos up to a year out really suits my Type-A personality. The least? The giant file cabinet full of unorganized magazines I inherited from former Smart editor Kara Eberle.

5. What’s been your favorite project or story recently? Why? I’m currently working on the September/October issue of Smart and have been working with Denatia Palmer, Miss Black Pennsylvania 2012, and Brown’s Orchard for our cover. It’s a lot of fun to watch all the elements of a photo shoot come together. And I have enjoyed watching all the stories from Smart’s awesome team of writers roll in. There are a lot of great home, family and self stories in this next issue.

6. The drink that’s on your desk right now is: Water or coffee — always

7. Your favorite journalism-related blog you read or Twitter feed you follow: I really like to look at Charles Apple’s blog (http://apple.copydesk.org/), which focuses on the visual side of journalism and always features amazing designs. On Twitter, I follow Overheard in the Newsroom (http://twitter.com/#!/OHnewsroom) because it is ridiculous and makes me laugh out loud at least once a day.

8. What’s the last movie you saw in theaters? The last book you read? Movie: “Ted,” which made me cry (I was so nervous that the bear died … spoiler alert: he doesn’t)  Book: “Bright Shiny Morning” by James Frey

9. What’s your favorite place in York County? I love visiting Central Market and making an obligatory stop at the Just Cupcakes stand.

10. What’s one piece of newsroom jargon that had to be explained to you? I totally googled what a magazine “department” was after visual editor Brad Jennings dropped it during a conversation (Smart has three). [Editor’s note: A “department” is another name for a section of content. Smart’s three are family, home and self.]

Last week, we ran a Q&A with assistant sports and GameTimePA.com editor Lyzz Jones. To read all of the staff Q&A interviews we’ve done so far, click on the “Staff Q&As” under “About us” at the top of the homepage. Wondering where former Smart editor Kara Eberle ended up? She moved into the metro department to become day metro editor.