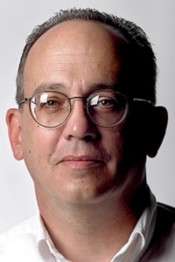 To help you get to know our newsroom staff a bit better, a series of question-and-answer posts with each journalist will run on Mondays. This morning, meet multiplatform courthouse reporter Rick Lee. He covers the ins and outs of court happenings in York County, and blogs on The Docket Sheet.

1. What made you want to become a journalist? The damn sensationalistic TV coverage of TMI. I was living in New Mexico at the time and in constant contact with family in York. What I was hearing from my father, who was getting his information from York County news sources, was vastly different than what was on the national news. I was in the Air Force and taking some classes at Eastern New Mexico University. I wrote a critique of the national news coverage and my professors suggested going into journalism.

2. How do you see journalism changing? It has changed drastically since I wrote my first published story in 1982, which I wrote on an electric typewriter in Levelland, Texas. Newsprint is in the process of disappearing. Instead, the news, as it is gathered and written, is being disseminated immediately to your PC, pad, book and phone.

3. What do you like most about your job? There is something different almost every day. And I’ve always been a news junkie. The least? Calling families to ask about a recently deceased relative.

5. What’s been your favorite project or story recently? The signed death warrants for convicted killers Hubert Michael and Mark Spotz. Why? I’ve followed and written about their cases since their arrests.

6. The drink that’s on your desk right now is: Cold coffee.

8. What’s your favorite movie? All the President’s Men. Book? “The Magic Journey” by John Nichols

9. What’s your favorite place in York County? The junk shop in New Salem.

10. What’s one piece of newsroom jargon that had to be explained to you? A crusty old West Texas editor had to explain what a “hard lead” is. I can’t tell you exactly what he said but I’ve never forgotten it. It remains my yardstick for a hard lead.

Last week, we ran a Q&A with assistant news editor Dan Herman. To read all of the staff Q&A interviews we’ve done so far, click on the “Staff Q&As” under “About us” at the top of the homepage.