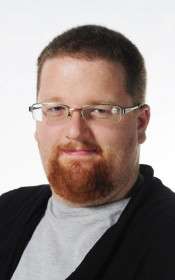 To help you get to know our newsroom staff a bit better, a series of question-and-answer posts with each journalist will run on Mondays. This morning, meet assistant news editor Dan Herman. He works on the night news and digital desk. You might have seen his blog posts on Book Buzz or Twenty & Change.

Name: Dan Herman
Lives in: York
Hometown: Arlington, Wash.
Position at the YDR: Assistant News Editor
Years with the YDR: .39
Graduated from: Washington State University
Facebook: fb.me/dan.herman
Twitter: twitter.com/thoughtbox
App.net: alpha.app.net/danherman
Whatever you’d like to tell us about yourself: It’s often difficult to discern the difference between work and not-work anymore. (Because work is so much fun, of course!)

1. What made you want to become a journalist? Honestly? I got bored one summer in college and started writing (very bad) opinion columns. Things sort of spiraled out of control from there.

2. How do you see journalism changing? Not a whit. The information stays the same. All that changes is the format it’s presented in and how it’s consumed.

3. What do you like most about your job? The least? The best part is the versatility: Night news is all about everything. The worst part is the hours: I don’t mind working that late, but I wind up not going to sleep until 5 in the morning.

5. The drink that’s on your desk right now is: Water. It’s in one-a-them fancy-pants bottles, but the water’s straight from the YDR tap.

8. What’s your favorite place in York County? Based on my limited explorations, I’d say the drive from York to Hanover (the back roads).

9. What’s one piece of newsroom jargon that had to be explained to you? Our file-naming structure. Because we’re the Daily Record, everything is saved as “dr” followed by whatever the thing’s about — if your Sept. 8 story’s about snakes, it’s named drsnakes0908. Except everyone pronounces it “Dr. Snake,” so I’m sitting there wondering who this reptilian medical professional is.

Last week, we ran a Q&A with sports reporter Jim Seip. To read all of the staff Q&A interviews we’ve done so far, click on the “Staff Q&As” under “About us” at the top of the homepage.