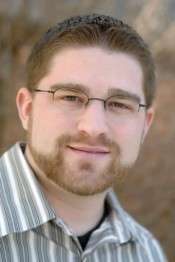 To help you get to know our newsroom staff a bit better, a series of question-and-answer posts with each journalist will run on Mondays. This morning, meet assistant features editor Matt Eyer. You might have seen his book reviews on Book Buzz or read his stories every so often on the FlipSide Weekend cover. And while you were watching the Oscars at home last night, Matt was in the office laying out the Living cover.

Name: Matt Eyer
Lives in: West York
Hometown: Emmaus, PA
Position at the YDR: Assistant Features Editor
Years with the YDR: 6
Graduated from: Penn State
With a degree in: Journalism with an English minor
Twitter: @mjeyer
Email: meyer@ydr.com
Google+: Search for Matt Eyer
Whatever you’d like to tell us about yourself: I’ve worked in newspapers since I graduated from Penn State in 2004, mostly in editing and/or design. My first job after college was at The Capital newspaper in Annapolis, Md., where I was a copy editor/page designer working on news, entertainment and features.

In early 2006, I came to the York Daily Record, joining several people I had known from my days at Penn State’s Daily Collegian. I started here as a copy editor on the night news desk, and moved to the night metro editor position in 2008.  This past year, I switched to my current position in the features department, where I run the day-to-day operations, coordinating the production of the York Daily Record Living section and the production of several sections of two other newspapers. I still do some design work, mainly the Wednesday YDR Living & Food section and the Sunday YDR section. (See some of my design work at http://newspagedesigner.org/profile/MattEyer)

Outside of work, my interests include film (I’m a big fan of directors Woody Allen and Werner Herzog), books (find some book reviews I’ve written at http://www.yorkblog.com/books/author/matt-eyer/), sports (I’m all over the map with favorite teams — Philadelphia Flyers, New York Mets and Cincinnati Bengals) and craft beer.

1. What made you want to become a journalist? I think it has to partially stem from growing up in a house that always had a newspaper subscription. As a kid, I would often look at the paper in the morning. I worked on the school newspaper in high school, which is when it really clicked that journalism was what I loved to do, was good at, and wanted to pursue as a career.

2. How do you see journalism changing? It will continue to evolve more and more rapidly as technology evolves more and more rapidly. Journalists are (finally) understanding that people want to be reached in different ways, whether that be by newspaper, website, mobile app, Twitter or anything else. I think journalists are more engaged with their communities as a result.

3. What do you like most about your job? The least? I like that you learn a lot. We’re also covering different topics, and telling stories of different people. Although many day-to-day duties are the same week in and week out, the stories we tell are different, and I enjoy that change.

5. What’s been your favorite project or story recently? Why? In October, I wrote a piece for FlipSide Weekend on how to survive a train robbery, a fun way to preview a Strasburg Railroad event that was going on that Sunday. I had a good time researching and writing it. On a weekly basis, I design the Sunday Living section, and putting together that cover is fun.

6. The drink that’s on your desk right now is: Black coffee. Always.

7. Your favorite journalism-related blog you read or Twitter feed you follow: Charles Apple’s The Visual Side of Journalism blog, apple.copydesk.org. You can find a lot of great inspiration on page design, and he likes to tell the stories of the people behind pages. He has a lot of fun in his posts.

8. What’s the last movie you saw in theaters? The last book you read? The last movie I saw in the theater was “The Descendants.” It was good, but not worthy of Best Picture in my opinion. (I’m answering this question before the Oscars are handed out, but you’re reading it after. I’m assuming “The Artist” won. My vote would have been for “Hugo” or “Midnight in Paris”).  I recently finished reading Arrian’s “Campaigns of Alexander.” I often read books, both fiction and nonfiction, about classical and ancient Greece, and Alexander the Great has been an interest recently.

9. What’s your favorite place in York County? Downtown York. It’s a shame a lot of people seem to want to avoid it. There’s some great eating, and there are plenty of places to find diverse beer selections. And gotta love The York Emporium. Fun place to spend a Sunday afternoon.

10. What’s one piece of newsroom jargon that had to be explained to you? Here’s one I hadn’t heard before I worked at the YDR/SN: The ear. An ear is a teaser in the upper left or right corner of a page. Although it’s technically not in use under the current design (unless you count the section letter itself), the Daily Record previously had two ears on inside section fronts: one on the left that teased to a story inside the section, and another on the right listing different sub sections, such as Obituaries.

Last week, we ran a Q&A with night metro editor Kate Harmon (Fun fact: Kate replaced Matt when he moved over to features). To read all of the staff Q&A interviews we’ve done so far, click on the “Staff Q&As” under “About us” at the top of the homepage.