Posted by YDR InsiderFebruary 13, 2014 Behind the scenes, Editor, News coverage

‘Sometimes this is how you get to work in #yorkpa’ 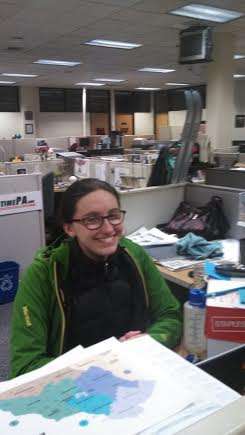 ‘Sometimes this is how you get to work in #yorkpa,’ York Daily Record’s Brad Jennings wrote in a Tweet. He was referring to the cross country skis behind the YDR’s Steph Reighart, who made the trek to the office this a.m.

Early on in today’s storm — at about 4 a.m. — one of our journalists headed to the office on cross country skis.

Stephanie Reighart lives near York Hospital and skied the four miles to the YDR’s West Manchester Township plant in 75 minutes.

She wasn’t alone on her trek. She wore a GoPro camera strapped to her head.

You can see an edited version (by the YDR’s Brad Jennings) of what she saw on her journey below.

Meanwhile, her skis rest near her desk, primed for her return trip later today.