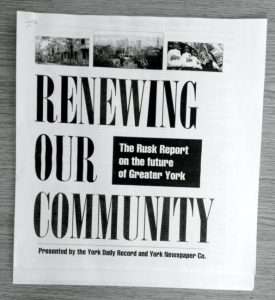 The cover of the original Rusk Report of 1996, circulated to readers of the York, Pa., Daily Record.

The Rusk Report is an often-cited document when discussions in York County turn to York City’s financial woes.

The 1996 report, and a followup document 6 years later, covered a lot of ground, and the two reports’ recommendations were widely distributed in special sections to readers of the York Daily Record and beyond.

“But I concluded that ‘suburban sprawl, concentrated poverty, and fiscal disparities are eroding York County’s quality of life. They aren’t just York City’s problems. They are county-wide problems. They must be addressed through county-wide strategies.’

One of those often quoting the report nowadays is the York Daily Record. This from a  recent editorial gives an assessment about the state of things in the past 20 years:

“In the end, this all comes back to the Rusk Report. We know, those words make your eyes glaze over. But nearly 20 years ago urban expert David Rusk accurately assessed the problem, presciently predicted what would happen here if nothing changed — and offered solutions.

“Well, almost none of his solutions have been implemented.”

Rusk Report No. 3, anyone? Or too much talk, and not enough action?

– Dennis Hetzel, editor of the York Daily Record, when the Rusk Reports were issued writes a bit about these important documents on Facebook.

– Here’s a report about one return visit David Rusk made to York, Pa.