From kickball to kickboxing: Events from around 1891 Loucks Road – and York, Pa.

Caitlin Kerfin, organizer of kickball games for 1891 Loucks Road, assessed the first week: ‘We had an amazing time out on the YDR field for a friendly game of kickball. A few of us weren’t very athletic, but that was what made it more fun. We also had some awesome players showin’ how it’s done.’ Colorful nicknames were assigned in this first game. Scott Fisher’s Boom-Boom is among the best – and is perhaps the only one that’s printable. Next game: June 3.

We started with kickball, and we’re ending with kickboxing at the York Daily Record/Sunday News at 1891 Loucks Road below. (If photos don’t appear on mobile devices, click on the dates)  … .

Seems like long ago: The primary was only last week … and so was this favorite meal

We don’t need to wait for the polls to close to know who won the primary. #yorkvote #pizzaforthewin pic.twitter.com/jSWoWAZlKa — Kate Harmon (@katesharmon) May 19, 2015 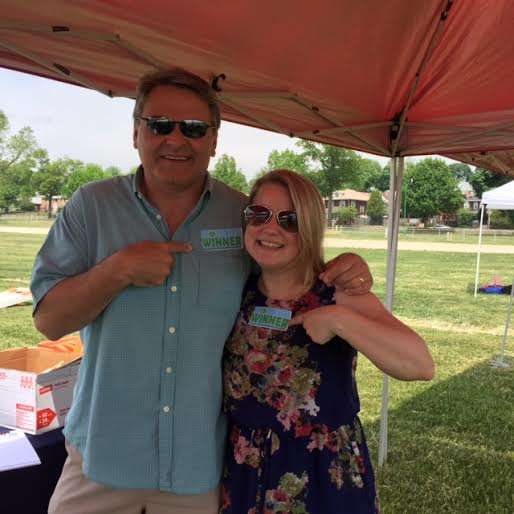 The sunrise through the office is beautiful this morning. You wouldn’t know it was crazy here 7 hours ago. pic.twitter.com/ycXArIiu2a

+++
Weekly headline writer: Mark Charisse won this week’s headline writing contest with his “Sandwich Steakout,” atop a story about the scores of people waiting in line for free Primanti Bros. food.

+++
Kickboxing in the Park: And more of it is set for tonight at 1891 Loucks Road