The NewsVroom is seen at its unveiling in 2012. The mobile journalism and technology lab is regularly driven by York Daily Record/Sunday News journalists and colleagues at the York Newspaper Co. and MediaOnePa. Just minutes before this photo was made, YDR Managing Editor Randy Parker, the main driver of this project, motored the van up to 1891 Loucks Road. The YDR used the NewsVroom as the vehicle to rank its newsroom among Editor & Publisher’s ’10 Newspapers That Do It Right.’

“It all started last year when our parent company, Digital First Media, issued a challenge to its newsrooms. Put up a good idea for a media lab, and they would help make it happen. We shared our plans for a lab on wheels. And we put our enthusiasm about new technology on steroids.

“We wanted to put our newest tools and technologies in the hands of people who have never seen such things. We wanted to show them how we use mobile apps, how we share news immediately and how we use the content they create.

“So, we borrowed a van from our delivery fleet. And we procured sponsorships to cover the cost of wrapping that van in a graphic designed by our newsroom artist. We bought a Cradlepoint WiFi router, tables, chairs and pop-up tents … .”
On mobile? Click here to view

The van rolls regularly throughout York and Adams counties a year and a half later. And today, the YDR received word that the vehicle has passed another big milestone.

Editor & Publisher, respected journalism trade publication, has named the YDR as one of “10 Newspapers That Do It Right.”

E & P’s website describes this coveted award: “Never meant to be a ’10 Best’ list, instead it spotlights select newspapers that have earned a notable achievement in at least one particular area, carried out a successful innovation, implemented cost savings procedures or developed programs that have generated revenues or increased circulation.”

So that’s the story about how an old, white circulation van became a colorful award-winning vroom, driven by journalists and their colleagues serving the community. 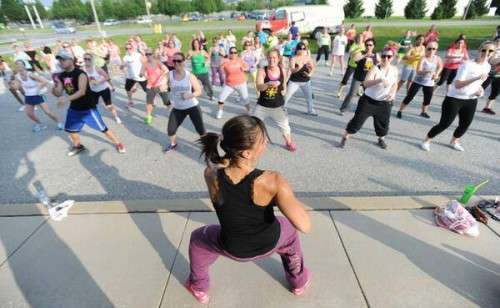 The NewsVroom is there at another reader engagement initiative – No Sweat, York – that was part of the YDR’s winning entry to Editor & Publisher in 10 Newspapers That Do It Right for 2014 competition. “Through various new efforts, we work to provide our community with the tools they need to succeed,” the entry stated, “whether that’s in the form of a newspaper, an iPad with our website, a cellphone with our app or an outdoor fitness class.”