Posted by YDR InsiderNovember 10, 2012 Behind the scenes

How we covered the election on the web 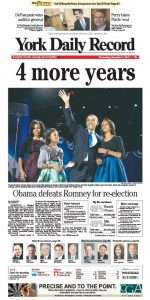 If you’re a regular reader of our YDR Insider, there’s probably a good chance you’ve already seen the page at right, either in a previous post or in the paper version that was delivered to your door Wednesday morning.

That page, plus the inside election results, were the product of hours of work from Night News/Digital multimedia journalist Dan Rorabaugh, who spent several very late nights/early mornings getting those designs ready for the big night — when they performed flawlessly, as expected.

But we’re Digital First Media, right? We also had to make sure we could get you the information digitally as fast as we could while still remaining accurate. This, too, required a bit of forethought.

You see, our web publishing system, though usually reliable, isn’t exactly the fastest when it comes to breaking news. So we had to devise a few different workarounds, utilizing a number of different technologies — including blogs, a dash of PHP and some Javascript — to bring you the news as fast we could get it.

Live results: If you’ve ever been to the state or the county’s election results page, you’ll know it’s a pretty dull experience. Lots of text arranged in tables, and while that’s OK for finding out information, there’s a reason we’d all rather look at graphs than numbers — they’re just easier to read. So we tried to bring you that in the form of this page. It’s pretty basic, just percentages, bars and names, but rest assured we’re going to use it as a springboard for much better-looking presentation in the future. We also had Sunday Editor Scott Blanchard running a LiveBlog that a number of you were apparently glued to all night, as well as interactive graphics from the AP and our own Sam Dellinger for presidential results.

Overcoming obstacles:
We get a lot of our national coverage from the Associated Press, which had some … er, issues on election night, namely by having their website go down from about 7:30 p.m. until sometime around 11 p.m., with brief resurrections for maybe 15 minutes total between those times. Luckily, I had moved to sit by our peerless Night Metro Editor Kate Harmon and our fearless leader Managing Editor Randy Parker, who alternately scanned the twitters and networks while frantically emailing/calling the AP to get some stories. Even with those hiccups, we still managed to get our tweets, email alerts and text alerts out within about 3 minutes of the AP calling the Pa. Senate, Pa. presidential and national presidential races. We also hoodwinked our publishing system a tiny bit to get some graphics up on the front page to let you know as soon as we did, linking to one of our blog pages to make sure the story was up immediately.

All in all I thought the night was a success, but not perfect, and I both discovered problems with some of the systems I devised for this as well as thought of a couple really cool new ones we can implement. If you’re looking for up-to-the-minute, nearly instantaneous coverage of local, state and national races come the next election, definitely check out ydr.com. It’ll be the place to watch.