Hats Off to the community – and the YDR/YSN 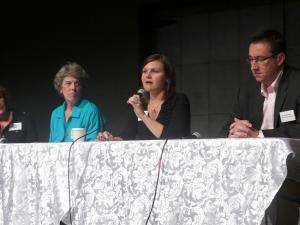 The problem of child abuse in York County is an ongoing emphasis of York Daily Record/York Sunday News coverage. And that coverage has been credited with keeping the issue in the spotlight. Five from our newsroom covered the recent child abuse summit. This photo captures part of that event: ‘Remembering Darisabel: Community Child Abuse and Neglect Summit.’

Some readers might read our letters to the editor and believe that all our news organization receives are letters critiquing the community – and us.

We run many letters of praise about community successes in our Hats Off letters on the Opinion Page. In fact, it’s amazed me for years that we don’t receive more of them because we freely run them. But we do receive many.

As for letters of praise to YDR/YSN/ydr.com staff, we receive many of them individually, but we haven’t often shared them to the public. With YDRinsider, we have a forum to do so.

Such is a letter Managing Editor Randy Parker and I received from Teresa Enterline, chaplain on call  at Hershey Medical Center when the badly injured toddler Darisabel Baez arrived there.

She wrote a guest column for the York Sunday News. The headline on that piece explains the moment: Darisabel’s death touched my soul.

So here are excerpts from Teresa’s letter, giving you a glimpse at the nice things the members of the public say, this time particularly praising Opinion Page Editor Scott Fisher:

“I’m still amazed at all that has transpired over the past two weeks.  I believe I shared with you that it was quite by accident that I came across Jason’s (Plotkin’s) outstanding documentary about Darisabel in the first place, and to think that soon led to my own essay about her being published in your fine paper is a privilege and opportunity for which I’m still in disbelief, but, even more, very thankful to you both and Scott Fisher.

“I must admit that I was very hesitant at first, only because I wasn’t sure
if I was ready to put my feelings out there so publicly.  But I am deeply
grateful for the sensitivity with which everything was handled.  I get a
sense from my communications with Scott and after meeting you both, that
that’s the norm rather than the exception at the York Daily Record.  And I’m
happy to be able to say that to you as a new on-line subscriber (as of 3
days ago).  I look forward to “opening the pages” of the YDR each day.”