Every office has them.

The co-worker who leaves a half-full coffee mug on her desk so long that the sugary/creamy contents mold-over, congeal and eventually start making barking and growling noises. 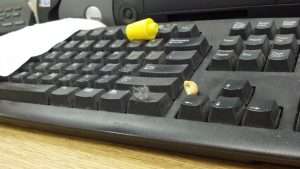 Or the guy who eats three meals a day at his desk and has enough crumbs inside his keyboard to feed a flock of seagulls.

Or the desk that should be featured on hoarders because its owner has held on to every scrap of paper received since Nixon Administration.

Our office has lots of these characters. Good people, every one of them. But sometimes the sloppiness can get out of hand.

A few weeks ago our executive assistant, Donna Mandl, couldn’t take it any more. Donna is not one of “those people.” Donna was in the Air Force before she came to work for us, and she sometimes gets nostalgic for white-glove tests.

So while she was fussing up a storm recently about how messy this newsroom was, I suggested we challenge everyone to a desk-cleaning contest. I’d put up some small prizes as incentives, and we’d have some fun with it.

So we sent out the following email to the staff:

Hello all! It’s almost spring and when else would you do your spring cleaning?

So, I thought it would be a good idea to have a spring cleaning happening in our newsroom.

You get the idea. We haven’t gone through this process since the “move” in the spring of 2006—that’s when we move from South George Street to this location.

And now for the most important part………..drum rolls, please…………

Randy will put up four $25 gift cards to Subway as incentives. One for each of the following categories:

1) Most spotless workspace (As judged by Donna Mandl, The White-Gloved Wizard—that’s me) – this judging will occur on Thursday, March 8, 3:00 p.m.

2) Most organized workspace (As judged by Joan Concilio, The Queen of the Organized)

3) Most dramatic change (As judged by Eileen Joyce, based on before-and-after photo and video documentation provided by entrants)

4) Most remarkable discovery (As judged by our historian—anyone know who that is?)

Results announced at the morning budget meeting on Tuesday, March 13.

Now get out there and clean to your heart’s content. Make me happy!! Ha ha!!

You wouldn’t believe the reaction this spawned. It’s amazing what the offer of a $25 Subway gift card will get you.

Mike Argento, a legendary desk-mess, was the first to fill a trash can. We were relieved to find that there were no bodies found under the stacks of newspapers he had accumulated.

Others taunted their neighbors. Some worked in teams (sports guys, go figure).

In the end, we had a startingly cleaner newsroom. Check out the results below. And if you steal this idea for your workplace, I’d love to see your story.

2)  Most organized workspace (As judged by Joan Concilio, The Queen of the Damned-Organized drawers) Winner: Ashley Wislock

4)  Most remarkable discovery (As judged by our office historian) Winner: Tom Barstow, who found “The York Gazette & Daily: a study of a Deviant Newspaper.”

Chris Dunn, who battled dust bunnies that outweighed her

Buffy, who left nothing behind for even a CSI crew to discover

Amy, who discovered that there is an entire extra desk at her desk 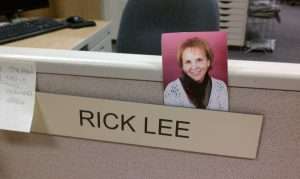 Rick: The only clue we could find of his existence at his desk was his nameplate and a picture of his wife

Shendy/Kim and Cheryl/Brenda, who maintain very clean desks even though they share the space with a co-worker

Matt Goul, aka Mr. Clean of the sports department

Mike Argento: We saw evidence of wood grain at his desk!

We appreciate the efforts by each of you who cleaned up and cleared out. Please don’t wait til next spring for your next cleanup. Your co-workers thank you.